Since I returned from study abroad, I’ve become acutely aware of the number of others also heading out of the country for the first time. It may have only been three weeks, but I remember the excitement and the anxiety. Most importantly, I realized that there was no way to prepare for everything, but I think that is to everyone’s advantage. Studying abroad is ultimately a learning experience, not just academically speaking, but also on an individual basis. 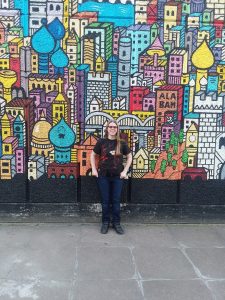 Standing in front of a dazzling mural

Prepare for Nothing is one of the first lessons that I came across the moment that I stepped into the streets of London. It was exciting! It was new and amazing! It was cripplingly overwhelming! It’s really easy to get overwhelmed, especially as someone who never left the country before. I felt especially overwhelmed since the other students in my program both had experience abroad, increasing the sense of isolation. I felt that I didn’t do enough to prepare for that moment. But that’s when I had to take the time to appreciate where it was that I was standing. It’s not about experiencing every inch of the country, since that’s not humanly possible. It’s important to live in the moment and keep your goals manageable. 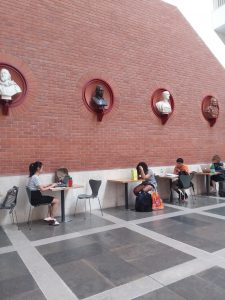 A collection of busts within the British Library

Learning Your Limits is also important, especially while abroad. Personally, I didn’t drink, though this advice also applies to alcoholic consumption. Though traveling abroad for the first time can be a huge leap past one’s comfort zone, you should still respect your own limits. Most importantly, enjoy your time how you specifically want to enjoy your time. Going back to the feeling of isolation, I felt incredibly lonely once I realized that I was on a completely different time schedule than the others in my program; they were up late, while I was asleep, and I would have breakfast while they were still sleeping. I tried to push myself to follow at others’ heels to avoid the loneliness, but I quickly realized that I was skimming the gorgeous scenery around me rather than drinking it in. This was most apparent when I found that half of my pictures of the Natural History Museum were indistinguishably blurry. Once I got the chance, I remedied this by revisiting the museum by myself and getting every angle of the T-Rex animatronic and spider exhibits that I wanted. I may not have made as many friends as I would have liked, but I did have a huge confidence boost by navigating the streets of a foreign country on my own accord. Find the routine that you’re comfortable with and test yourself at your own pace. The time by myself also gave me a chance to evaluate what it is was that I was searching for in London.

The big question I had for myself was, Why Am I in England? What drove me to leave my comfortable home and fluffy cat? For me, it was the allure of traveling to the country of the various authors that made such an impact on English literature, from Shakespeare to Shelley. I could hardly describe the sense of fulfillment that washed over me when I entered the Poet’s Corner of Westminster Abbey, and I looked to my feet, seeing Lewis Carroll’s name with his full name, Charles Ludwig Dodgson, wrapping around his grave marker. In that moment, I stood in the presence of my inspirations. The history is what fascinated me, and so I was thankful that my class, Shakespeare: Themes and Presentation, worked so well with tracing the literary movements. Reasons for traveling abroad are different for each person and can be as simple as sheer curiosity or doing something new for yourself. Use your motivation to guide you to what personally interests you, and you may strike that sense of fulfillment just as I had. Make the most of your experience by making the experience personal to you. 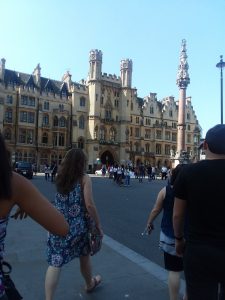 My first glimpse of Westminster Abbey