When I first stepped off the plane I had no real idea where I’d be going. As I made my way through border control and found the man that was providing my lift I didn’t know where he’s was bring me that I would be living for the next five months. They had given me the address long before I left and I’d looked up the address on Google Earth but nothing seemed to give me any real idea of what Conway Hall at SE1 8TX looked like. 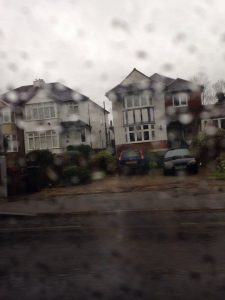 My first picture of London taken from the black cab on my way to my new home!

As the cab that picked me up from the airport drove on the left side of the road and the suburbs of London looked the opposite of anything that in any way reminded me of home I was unsure how I was going to feel when I finally had to leave this tiny vehicle. As we moved farther and farther into the city things seemed to change; I no longer was scared, and instead became excited knowing I would soon arrive. 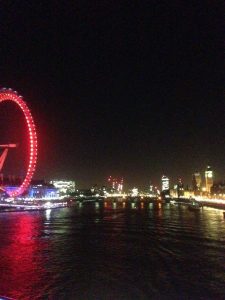 Another shot of the Eye at night looking from one of the many bridges.

On this particular day it was rainy, the type of weather that most people think of when they think of London or England was what I was greeted with. When I finally arrived at the address the GPS brought him to, it was much large than Google Earth led on. I was quickly greeted by Kim Di Nunzio, one of the directors in London along with the woman who would soon be guiding me with anything I would need. As she helped me carry my bags up what must have been a larger set of stairs though was made smaller by the construction being done around it, I was taken back by all the excitement that existed my new front door. As Kim flashed a small white card on the panel we went through one set of doors and then the next, being welcomed by a small man with an accent I wasn’t yet accustomed to who then handed over a collection of different cards and information to Kim before we could make our way upstairs. 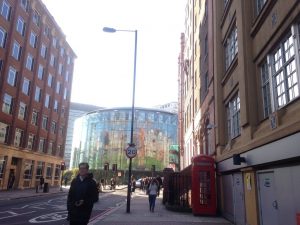 Just outside my flat was a large iMax theater, never went but used their coffee shop frequently.

As we approached a large elevator that looked as if it had been there for a hundred years, Kim pressed the button calling it to our floor and it slowly and creakily made its way down. Riding this slow elevator up to the fourth floor I was brought to another set of doors and just as before she tapped the white card to a panel and gained access into a small hallway that branched off three different ways, though Kim motioned me to the door on my left, one last time using that white card to gain access into what would be my flat. 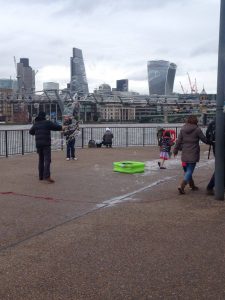 Living on the South Bank definitely had its perks, especially being only a few hundred feet from the Thames at any time.

The flat itself had two bedrooms, one large and one small, a large bathroom and an even larger kitchen. My bedroom, the smaller of the two, contained a space on the floor just large enough for my suitcase and duffle bag, though even now looking back it was just what I needed.

While I may not have lived in the same building as the people I went to school with, to me it was nice to have a place to get away from it all. Many of my friends that I met through school lived in the dorms that were connected to London South Bank University, though the building itself that they lived in was not as well maintained as Conway Hall and they each had to share a kitchen with a collection of other people while I only shared with one. At the front desk in Conway Hall there were a collection of different men that were there to both monitor us and make sure if we had any problems they could be addressed. To me there was something so comforting about the men that worked at the front desk, that even coming home late at nightI knew I was safe. 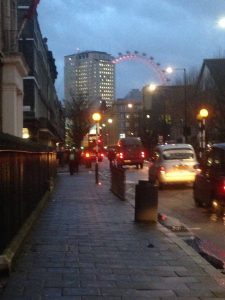 Being close to the London Eye was helpful on days where I didn’t know where I was going but knew when I found it I was home.

Conway Hall to me was my home and even now looking back I still consider that tiny flat on the fourth floor on the South Bank in London one of my favorite places in the world. When I often go to talk to other students about my experience and why I chose SAI this is one of the first things I talk about because while I loved London dearly Conway Hall made me love it more. To this day I still very fortunate in being able to live there and to me this was just another reason I loved SAI, I know it can sometimes be easier to just put the students they receive in the same housing as everyone else, though that’s what sets these programs apart from the other, the tiny changes that make you feel more at home in an unfamiliar place.

“During my Spring semester of my junior year I made the decision to study abroad in London, England, and my time there was nothing short of life changing. My time abroad changed my life in more ways than one allowing me to be opened up to different cultures and different ways of living that I never would have experience without the help of SAI. I have memories and times I will never forget and know that my time abroad will always stick with me”