Did you know that one hour from both England and France there are a series of small, English-speaking islands mixing both cultures and boasting gorgeous beaches, scenic views, cliffside walking trails, castles, museums, a wildlife trust and remnants of German occupation during WWII? Welcome to the Channel Islands!

The (old) Jersey shore is gorgeous – make sure to grab an ice cream at a nearby stand – Jersey is known for its dairy!

The largest of these islands is called Jersey and has its own airport with flights operating out of London through Flybe, EasyJet, British Airways and Jet2 and a daily ferry that runs between Jersey and St. Malo in France, which boasts its own coastal beauty and Breton charm. If you are looking for an “off-the-beaten-path” weekend trip, Jersey in Summer is a wonderful choice. Below are some of the fun sights and activities you can take in on a quick trip to Jersey during your time abroad!

1. Take a hike!
Jersey has tons of beautiful hiking trails and scenic views, including gorgeous beaches. A complete list of self-guided walking tours is available at: www.jersey.com/walking-in-jersey

2. Durrell Wildlife Conservation Trust / Jersey Zoo
Originally established in 1959 as a sanctuary and breeding center for endangered species, the Jersey Zoo still functions as a wildlife trust where endangered species can safely repopulate and be observed by conservationists who hope to help them thrive in the wild again. The residents of the zoo include well-known animals like gorillas but also include rarer animals like the aye-aye, Andean bear, the pied tamarin and several obscure birds, bats and reptiles.

View of Elizabeth Castle from the ferry between France and Jersey. On the left is “the Hermitage rock” where St. Helier lived in isolation for years in the Middle Ages. To this day annual pilgrimages and gatherings happen at the spot.

3. The Castles
Despite being only 45 square miles, Jersey has not 1, not 2, but THREE castles! Elizabeth Castle was built in the 16th century with the advent of cannons, which rendered the earlier Mont Orgueil castle unable to sufficiently defend the island. Today it functions as a museum and holds historical military displays. In the high season, local historians give live reenactments of medieval and renaissance military and civilian life at the castle on Sundays.

Mont Orgueil castle was built in the 13th century and overlooks the town of Gorey. In French, “Mont Orgueil” means “Pride Mountain” and the castle was used for defense until the construction of Elizabeth Castle in the 16th century, when it was converted into a prison. For almost a century, the castle has been operated as a museum and is open to the public.
In the northwest corner of the island are the ruins of the 14th century Grosnez castle with scenic views of the island. 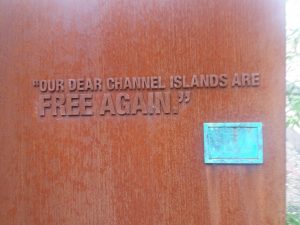 A quote from a Jersey citizen who survived occupation, on display outside of the Jersey War Tunnels.

4. The War Tunnels
Now referred to as the “Jersey War Tunnels,” the underground complex Hohlgangsanlage 8 was originally built by the Germans as a bunker and underground hospital during German occupation of Jersey during World War 2. Today it is an interactive museum complete with historical artifacts and first-hand accounts from locals who lived through occupation. You can even see the cavernous tunnels that were begun but never completed.

5. Stone Age sites
Jersey is home to the La Hougue Bie museum, one of the 10 oldest buildings in the world, pre-dating the Egyptian pyramids. The site is now a museum containing several Neolithic hoards found on the island and a medieval church atop the Neolithic mound.

The devil statue at The Devil’s Hole (Photo courtesy of atlastobscura.com)

6. The Food!
Being an island, seafood is plentiful and delicious on Jersey. Jersey is also known for its dairy, coming from the popular Jersey cows, which produce a rich cream used to make Jersey fudge and ice cream. Jersey potatoes are a common crop and apples are a staple in local products such as Jersey Black Butter.

8. The Devil’s Hole
There is lots of lore surrounding the 100 ft. wide “Devil’s hole,” including that it was created by a meteor. In reality, the crater was created by the collapse of a cave thousands of years ago. At some point, a statue appeared (likely from a shipwreck) and horns were added. It has since become a staple in local lore and a permanent sculpture has been added to the area.

For around $100 USD, you can fly round trip from London or take a round trip ferry from mainland France. If you are looking for a short, affordable weekend away full of history, culture, and natural beauty – Jersey fits the bill! You can see a complete list of activities & accommodation at: www.jersey.com.

Kate Pitts is University & Student Relations Manager at SAI, and works out of Pennsylvania. Kate holds a Master's Degree in Comparative and International Education, and loves travel and spending time with her dogs Charlie and Fred.