There is a common perception about studying abroad that views the semester as a prolonged vacation. People believe that students spend all of their weekends traveling to the major European capitals, such as Paris or London, but this only allows two days for scrambling around the city and fitting in only the most cliché of tourist sights. While this has provided amazing experiences for a lot of students, I have decided to go a different route with my time abroad. Rather than rushing around Europe, I prefer to visit the quintessential small towns in my host country. 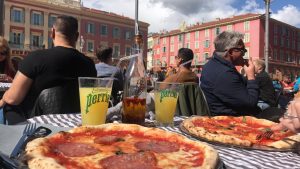 Pizza and Orangina in Nice

This semester, I am studying abroad in Paris, France. It is a world capital, where nearly 2.5 million people are crammed into 65 square miles – a mere 8 miles by 8 miles. Due to this overcrowding, Parisians do tend to fit the stereotypes that we give them – always in a hurry, never smiling, and certainly not outwardly kind to strangers. Not that this way of life is wrong or bad, but it was a lot to adjust to after living in the South in the United States my whole life, where everyone smiles at everyone and goes out of the way to be nice to strangers. Needless to say, I wasn’t jumping at the idea of more big cities with even more overwhelming environments. 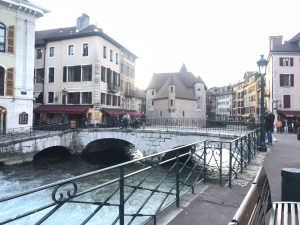 Canals and a Medieval Prison in Annecy

Instead, I have found that some of the small towns around France give me a much richer and more fulfilling experience. These towns are typically small enough to see and do everything in one weekend, without having to buzz around from one sight to another. I also feel that I get a better understanding of my host country. If my opinion on France had solely been based on my time in Paris, I would have a very skewed understanding of the country. Each region is so distinct in its own characteristics that you need to have visited a few of them to begin putting the puzzle that is France together.

For example, some of my favorite towns in France are Saint Malo and Annecy. Saint Malo is in the northwestern part of France right on the English Channel, in the region known as Bretagne. It is an French stronghold and fishing village still surrounded by the original fortress walls, and the people are so laid back and welcoming. It honestly felt like I was back home on the Chesapeake Bay. Annecy, on the other hand, is in the French Alps, about an hour from Geneva. Some people call it the Venice of the Alps because there is a network of canals that run through the city and out to Annecy Lake. You can feel the freshness of the air on your face the minute you step into the city, and the water is so blue and clear that you can see to the bottom of a majority of the lake. 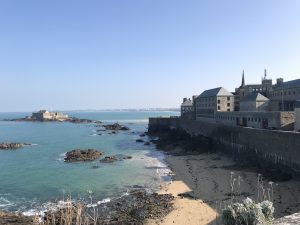 London, Paris, Rome, Amsterdam, Florence, etc. are all beautiful cities, rich in history and culture. However, they each require more than a weekend to truly get to know them. Small towns,. on the other hand, can be explored in two to three days and lend to the larger overall picture of your host country.

Alexandra is a spring 2018 SAI Paris student from the the University of Alabama.