When I first decided to study abroad I knew I wanted to do one thing, travel. Isn’t that everyone’s main goal?  To go as many places as you can in the three or four months that you are there, and not go into hundreds of dollars of debt.  When I arrived in Rome, I was pleasantly surprised that that was the main goal of all my roommates as well. On one of our first nights together we sat down, took out our laptops and began to research. We wrote down all of the places that came to mind on the back of a sheet of paper someone got from class that day. Not to our surprise, the number of places we wanted to go vastly outnumbered the number of weeks we had there. So we had to narrow it down. What country were we willing to give up in order to go to another. I never thought I’d have to make that type of decision, and it was harder than I thought.

The first trip we went on was already decided once we got there and that was through SAI. It was to a beautiful town called Abruzzo. We were led around the surrounding town, went horseback riding, and ate in the most beautiful venues in Italy. The best part? The trip was completely funded by SAI and all we had to do was sign up. One of my top suggestions is never say no to travel somewhere new abroad, especially if it’s free.

The beautiful landscape of Switzerland

Our next trip we had to plan ourselves and that was interesting. First off, it was to one of the biggest events in the world, Oktoberfest. There were 6 of us going and we had to book and Airbnb and means of travel. We didn’t plan ahead and the plane ticket prices skyrocketed. Therefore we had to take a bus, a 12 hour bus there and back. Once we got to our Airbnb we realized there was only one bed and no service. We left Rome at midnight and got into Munich around 1pm. We hustled around the city trying to find the perfect dirndls for the next day and then all snuggled in one bed. On the day of Oktoberfest we arrived to the festival and it was unlike anything I had ever been to. If you ever have the chance to attend I highly recommend (or if you can’t in October there’s always Spring Fest in the spring!).

After traveling on a bus to Germany for 12 hours, we decided the next weekend’s trip was going to be a little shorter of a bus ride. We decided to go to the Amalfi Coast. This trip we booked through a program called Bus2Alps and they arranged, travel and sleeping accommodations in a hostel.  We went on the first weekend in October and worried it would be too cold to go in the ocean, but oh were we wrong. We couldn’t have had more perfect weather or a better time. 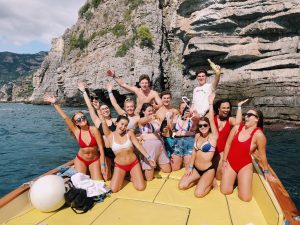 The next weekend I think we missed the bus so we decided to take another 12 hour bus trip to Switzerland. This trip was also through Bus2Alps where they got us there on the bus, set us up with a hostel, and offered us activities for every day we were there. The activity we chose was paragliding and it was one of the most amazing things I have ever done. Running off a mountain top and soaring over the town on Interlaken, looking at the Swiss Alps was beautiful. The town was the perfect size to walk from one end to the other and the chocolate was to die for (go to the funky chocolate factory and got the chocolate covered strawberries!).

After three weekends in a row of traveling we decided to take a break. A couple weeks later we hopped on a plane a headed to Barcelona, Spain. This time we went on our own and found our own hostel to stay in. We navigated around the city having the most amazing food I’d had since being abroad. The sites were intricate and mesmerizing. The nightlife is unlike anything I’ve experienced (don’t expect to get much sleep if you’re going to live like the locals). We ate dinner at midnight and ended up going to bed when the sun was rising. I wouldn’t change anything about that trip and I hope to return one day. 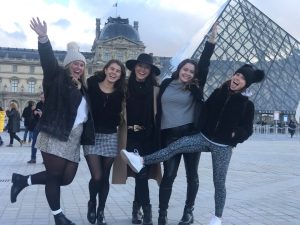 The final trip that we took was to Paris. The city of Paris and seeing the Eiffel tower is on everyone’s bucket list, so how could we not go. While we were there it was close to Christmas and there were Christmas markets covering the city. Warm hot chocolate and macaroons filled our bellies every day. We engaged in the traditional crepes in the morning along with tea, and tried escargot (that I don’t recommend). We went to the Eiffel tower and sat until the sun set, then we traveled to the top to look over the beautifully lit up city.

Over my time abroad I learned so many things not only from the culture of Rome, but from every single place I travelled. My biggest tip when traveling is to immerse yourself in the culture, don’t be scared to try new things and get out of your comfort zone. You learn so much about a culture and how interesting it is by engaging with the locals and doing what is traditional to them whether it be a food or dance.

Holly was a fall 2018 SAI Rome student from Suffolk University.