At Central Saint Martins College of Arts and Design’s new home, a glass-covered walkway known as the Street offers a cafe and a shop that sells student supplies. 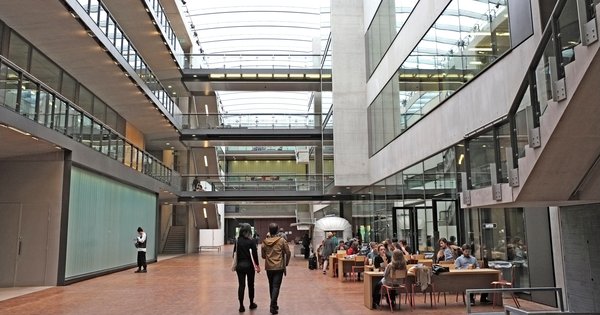 LONDON — Hard hats and fluorescent jackets seem, at first sight, to be the only fashion uniform. Then a shaved head, a pair of ballooning pants, a rainbow coalition of patterned hose and Oriental robe bob across the building site that stretches as far as the eye can see. 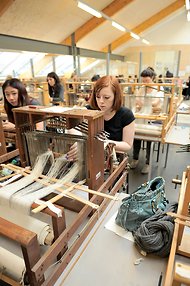 Bryony Lane at a loom in one of the school’s new studios.

Only the spire of the red-brick Victorian St. Pancras train station and an abandoned old building by the sluggish waters of the Regent’s Canal are reminders that this King’s Cross area was once a hub of industrial activity, where grain arrived from the countryside to feed London back in 1851.

In the past two weeks the site has become Campus Cool. Four thousand students have taken over a complex that is a dynamic mix of ancient and ultramodern. This city’s regeneration game has brought the University of the Arts London and its iconic Central Saint Martins College of Arts and Design to a new home.

Entering the futuristic and ancestral buildings that lead away from the under-construction Granary Square, the pathway to the new artistic paradise is called the Street. The glass-covered walkway — which is 110 meters long, or 360 feet, and 20 meters high — is punctuated by a canteen with chairs and tables and a student shop bright with colorful yarns and oil paints.

Alongside this long hall, with bridges connecting the two sides, is a meld of worn brick and transparent walls.

From the outside, the glass walls offer a view of teaching rooms in action. From the inside, the windows look out on to the original brick buildings. In a deliberate study in contrasts, warm stone is played off against smooth concrete and cratered walls face metallic rails.

The meld of heritage and modernity seems a particularly British combo. The campus’s architect, Paul Williams of Stanton Williams, called the juxtaposition “a stage for transformation, a framework of spaces that can be orchestrated and transformed by staff and students.”

Typical of that idea is the long project room, adaptable for many uses, where jewelry students have already pinned their names in thin metal strips on wood-screened walls.

Since the building embraces disciplines brought together from across the city, the campus includes an area for performing-arts students and a high-tech convertible theater with an audience capacity of 300. There are photographic study rooms, a 4-D computer lab, areas for graphic art and, of course, fashion.

Yet all is not as spanking new as the stroke-able wooden desks for the student jewelers or the state-of-the-art digital weaving machines. In one room, Ricky Lee Brawn, a technician at the school, displays an ancient machine saved from the bowels of Central Saint Martins’s original home. Worn wooden hammers lie beside streamlined modern machinery and the enthusiastic Mr. Brawn says: “I couldn’t think of a better place to work.”

Flexibility is a key to the new campus. That can mean students dragging furniture to the end of the building to create a messy, relaxing area for a bird’s-eye view of the walkway, or an architectural student making a project out of drawing the angular structures. Students can set up the many work tables, some individually soundproofed, in any configuration they choose throughout the building.

The library alone — with its high-tech search methods and big windows framed by the original ancient wood shutters — is a major change from the higgledy-piggledy old campus building, with its 11 staircases and warrens of rooms.

Three students from China — 40 percent of CSM’s students come from outside Britain — expressed enthusiasm for how the space allowed easy, open contact with their peers. And Boe Holder, who is studying fashion history and theory, said that, though she had misgivings about moving out of the antique Charing Cross building, she loved the new campus, especially the accessible and open library: “the best bit.”

The dean of fashion and textiles, Anne Smith, said: “What is really fantastic is the mix of all disciplines from drama students and fine arts. I think the student community will be much healthier.”

Student Natalija Mencej at work in one of the studios in the new Central Saint Martins building, which also has an area for the performing arts and a high-tech theater.

Jane Rapley, the head of Central Saint Martins who has been connected to the college since 1987, is proud of its starry roster of alumni. In fashion alone, former students include more than half the designers showing in London Fashion Week and such illustrious names as Hussein Chalayan, Stella McCartney, Alexander McQueen and Phoebe Philo of Celine.

“It’s transparent. We can see each other, see what they are doing in the studio. There is a much better sense of community,” Ms. Rapley said about the new campus. “It sets the tone and an ambition. It is very impressive in terms of our relationship with the outside world and other parts of higher education. I hope it will become a magnet.”

Ms. Rapley’s achievement has been to turn Saint Martins into a brand, which is why there is an increasing number of industry collaborations and why a French company like LVMH Moët Hennessy Louis Vuitton has stepped up as a sponsor.

Ms. Rapley said she believed that though many would initially regret leaving “the much beloved old building,” the opportunities the new campus offered were immense, especially with “the London scene growing up around us.” She also thought that the embrace of overseas students during her tenure was a reflection that “our industry is global.”

Despite the many different disciplines taught under the banner of the University of the Arts, Central Saint Martins is mostly identified by its creative and powerful fashion education.

Willie Walters, course director of the bachelor of arts programs in fashion, has 650 students working on weaving, knitting, pattern cutting and overall fashion design in an area a third smaller than the previous space.

Ms. Walters does not hide her emotional feelings about leaving the Charing Cross building and the fight she had over finding enough space. But she says now: “Every time I come here, I feel jolly. It is an uplifting building.”

Perhaps it is the openness, the feeling that one teaching space flows into another and the constant views of the ancient industrial core through the light and airy new shell, that makes the campus seem inviting and all-embracing.

“We have less student space and more public space, but the students will take over,” said Louise Wilson, head of the master’s degree fashion division.

The masters area houses the crème de la crème of imaginative designers on the upper floor, where a vast balcony offers a sweeping view of the 67-acre, or 27-hectare, redevelopment projects of East London, from the architectural landmarks of the financial district to the work for the 2012 Olympics.

Ms. Wilson sums up the mission of this £200 million, or $316 million, school for arts and crafts. “It’s never about the building,” she says. “It’s what the students produce.”

1 responses to “NY Times: “Design School Unites the Old and the New””