The whole idea of just coming to Paris has been a challenge itself. But now sitting down in a café in Rue (street) de la Convention, I can say that I finally made it; my dream has come true. 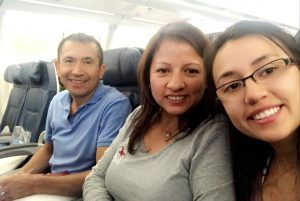 My first week in Paris was full of adventure and learning experiences with my family. It totally gave me a boost of confidence being able to explore the streets of my new city with them. I will admit that we took the wrong metro a couple of times, walked the wrong direction and ordered something from a restaurant menu with a completely different expectation. One time we were in a café close to our hotel after a long day of walking around museums and cathedrals. Our stomachs were hungry and in our mind we were picturing two cooked pieces of salmon; warm with avocado on top and fries on the side after making our order with the server. But when the plates arrived, we looked at them in surprise and we quickly learned that “tarte” means raw in English. We made silly mistakes as a family but our mistakes left us with some unique stories to tell. 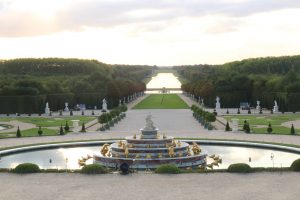 This is my first time living out of my home. At times it has been a challenge taking care of myself all the time. Because sometimes when you come home from school all you want to do is lay down and take a nap but then your stomach starts growling saying; “I am hungry” and no one but you can feed your stomach. Although the cooking part may seem a challenge itself since you have to think ahead for breakfast, lunch, and dinner. It has been fun walking over to store with my reusable grocery bag in order to get some food. I did notice that some of my favorite items that are cheap back in states like mango, lemon and avocado are really expensive here. So it has taken some creativity to find a fruit that can replace my passion for mango or my passion for salads with avocado. 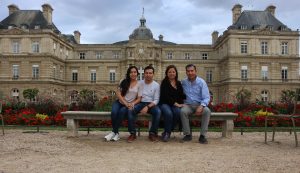 One of the most captivating experiences with a local was a night after our school’s back-to-school boat party. The school gave some amazing burgers but it started raining so three of my friends and I decided to head over to a café and relax for a bit. Later on, more people joined and soon we had a table full of girls and one guy. This was so intriguing to a local lady that she was in awe to see us in a group and she decided to talk to us. She asked every person their name and what we were going to school for. She was super proud of what we wanted to study and to see us all together in Paris. She kept saying that Paris was happy to have us here and that even though some people could be rude at some point, to not pay attention to that because in the end, the French are grateful for the Americans for what we did on the beaches of Normandy. She explained that if it wasn’t for American action, the French people would not be enjoying the same kind of freedom they have right now. She shared with us numerous life advices and motivated us all to be the best we could be and that in our faces she could see one of us becoming the next female president. She encouraged us to not just think of ourselves all they time but instead to work together in order to succeed . Another important tip she suggested was to learn French she said; French people like it when they see you trying your best to speak French. But what stuck to me the most was when she said to do what makes you happy no matter how difficult it can be or what other people say.

Diane is a fall 2017 SAI Paris student from the University of Texas at Arlington.