About a month before I boarded the plane to BELLA ROMA I went through major denial that I was actually leaving the country. The last three days I spent in Colorado were uneventful as I treated each like any ordinary day – like a crazy person I even worked the day before I boarded my plane! How I had time to pack I’m not sure.

All of the sudden I landed in Rome and all the airport signs were in Italian.

First gelato of the trip from Old Bridge – right by Tiber Campus!

You would think it would have sunk in by now but the reality of being in Rome hits me every time I walk the narrow streets dodging mopeds and hear store owners call, “bene grazie” or when the garbage truck drives down the cobblestone street, clashing glass at 0600. I love the quirks of Rome and get a tinge of saddens thinking that one of my four months is already over. But I am working to make the most out of my time here.

In the first three weeks, I have attempted to immerse myself in the Roman foods, transport system, and culture. I’d like to share some highlights and either inspire or help you relive a European adventure.

FOOD
Romans are great at pasta and pizza – that’s a given. However, there are two new snacks that I am bringing back to the states. 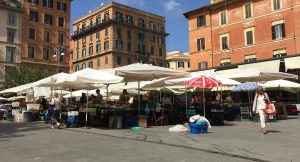 The first time I came here I accidentally bought in kilos which is 2.2 pounds!

Caprese salad – with a twist
Pesto, buffalo mozzarella, bread and tomatoes. You said pesto – it’s the best here! I found that purchasing fresh tomatoes and mozzarella from the market at Piazza di S. Cosimato for a couple euros is way cheaper than Panella which is a regular grocery here.

SupplÌ
This is a classic Italian street food. It’s a ball of rice with mozzarella and tomato that is fried. [Are you starting to see a theme in Italian ingredients?]  My roommates and I went on a food tour and discovered a popular supplì restaurant on our street! Ironically it is called Supplì on Via di S Francesco a Ripa so check it out if you are ever in Rome.

TRANSPORTATION
Transportation back home means, “let’s walk to the store” or “we are driving to dinner.” In Rome, I am living in the city where everything (including ancient monuments) are in walking distance or there are four forms of public transit. 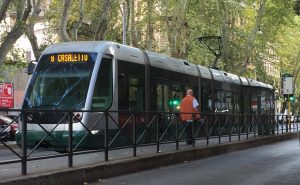 Public transit consists of tram, train, bus, or metro. By the second weekend I had taken all of them. One day I found myself switching from the H-bus (this runs above ground) to the A-line metro (this runs underground and has two lines) and back on 8-Tram (runs above ground in a fixed route). My observations from using public transit here are as follows:

CULTURE
Transitioning into this culture is easier than I expected. Perhaps it is because the neighborhood we are in [Trastevere] is fairly tuned to Americans. I actually came prepared to, hand-motion and “grazie, prego” my way through this semester. In fact, I’ve picked up on more Italian than I expected and hear more people speak inglese than I thought. The slower lifestyle, such as late dining, is something I had to just to but I am beginning to like. 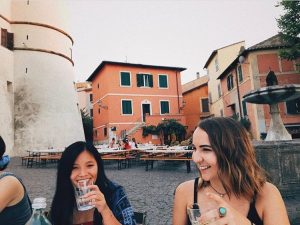 A friend and I drinking Frascati white wine at Frascati, Italy

It’s the conclusion of my fourth week here in Rome and there is still so much to do. Fifty free things to do in Rome and I’ve only done three of them so far! I am extremely grateful for this opportunity and I plan on being exhausted until my feet land back in the U.S. 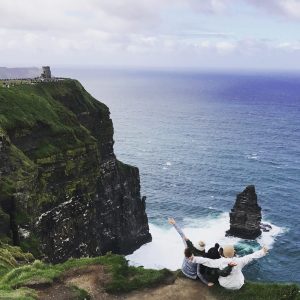 Ireland is the name, traveling is the game

Lucy is a fall 2017 SAI Rome student from Lindenwood University