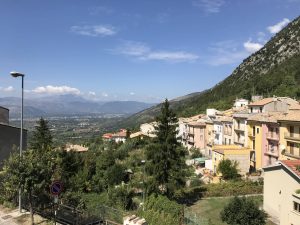 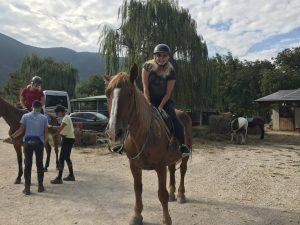 Before we left for our ride

The weekend started off with a bright and early 8 am bus ride to Pacentro. At Pacentro, we took a guided walking tour of the town before having lunch at Taverna dei Caldora with a spectacular view. Afterwards, we were sent off into four different groups to either go horseback riding, canoeing, mountain biking, or candy making. I was lucky enough to go horseback riding, and if you know me at all, any chance to be with horses is a dream come true. The ride was a typical trail ride, but the mountain views gave it a whole new perspective. The same establishment also makes honey, so after the ride, we also got to learn about bees and how they make honey. Once everyone was done with their activities, we met back at the hotel for free time and dinner by the pool, which consisted of way too many pizzas, but I still made sure to try almost every one. 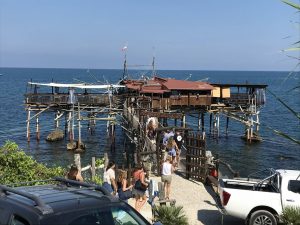 Saturday began with the beach. We drove to the Trabbocchi coast for a 3-hour long beach afternoon, which was followed by the largest and longest lunch I have ever had. The beach was absolutely stunning; soft sands and clear waters that contained no waves. I spent a mixture of my time playing volleyball, laying out, or chilling in the clear water. If we could’ve spent the whole day there, I would have. But we departed for lunch at Trabocco Punta Isolata around one, which entailed the greatest assortment of seafood I’ve seen during one meal. We were given different appetizers, pastas, and main dishes that all contained different types of seafood. The lunch lasted a hearty 4 hours and I couldn’t move by the end of it, but if you like seafood, it was beyond worth it. After a long day filled with sun and seafood, we stopped at the Abbey of San Giovanni for a nice view before heading back to the hotel. We were given dinner again, which I honestly can’t explain why anyone even showed up after the lunch we had.

Our first antipasti, or appetizer in English, at Trabocco Punta Isolata

Finally, we finished off our weekend by heading to Calascio to tour the Rocca Calascio. Rocca Calascio was definitely one of the highlights of the trip, as my breath was taken away several times by the castle and mountainous views. After the free time, we took a donkey-guided hike down Santo Stefano, which lasted a little over an hour. The hike was finished with my favorite lunch of the weekend at La Locanda sul Lago, where I discovered my new favorite pasta. Afterwards, we finally returned back to Rome, utterly exhausted, but if given the choice, I would do the trip all over again. Not only was it a chance to see more of Italy, but it was also a chance to get closer to my SAI group and make even stronger connections. I definitely won’t forget SAI’s weekend excursion to Abruzzo. 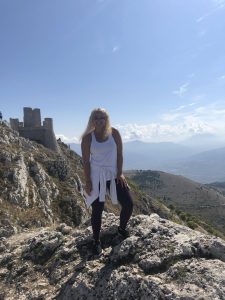 The breathtaking views of Rocca Calascio