Florence
What I Learned About Myself in Florence
Katie, SAI Ambassador
October 2, 2018

We recently caught up with SAI Ambassador Katie, who took some time to answer questions about her time in Florence.

What was your favorite class abroad and why?

I have never loved college courses as much as the ones I took at Florence University of the Arts. It is hard to choose a favorite when each class varied so much in its structure and personality. I was privileged to take Florentine Art Walks with Dario and get to learn about the ancient art and architecture of the renaissance period. We got to see how the art impacted the growth of modern Florence and the remains of those structures. Florence is a city that is constantly speaking with beautiful, preserved history that is meant to engage individuals. Dario was a sassy instructor that always kept us on our toes, made us laugh throughout the lessons, and let us stop for gelato more times that not. This was my favorite course because it familiarized me with my host city and taught me the true personality of Florence, ancient and present. 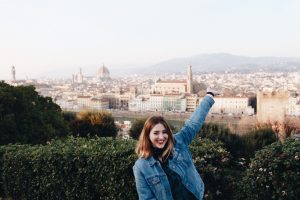 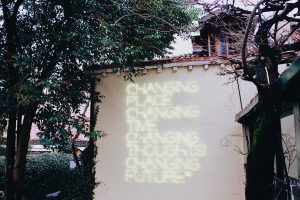 This neon sign by Maurizio Nannucci found in the garden of the Guggenheim Museum in Venice summarizes my longing to grow after being abroad.

What did you learn about yourself when you were abroad?

After I got back to the States I began immediately missing the life that I had molded for myself in Italy. It didn’t take me long to learn that was being confined to minuscule ideas and people who settled far too easily for a simple life. There is so much more to learn from people of contrasting cultures. There’s a flexibility to adapt. We become comfortable with a compact version of ourselves and after having exposure to different challenges abroad I began to realize that I didn’t have a choice whether I wanted to grow or persevere, it was necessary. I learned that most of the things that consume me here in the States lack substance and we have a choice to live differently. In Italy, there is a very laid-back atmosphere and I realized most of the time I would grow impatient and want things done efficiently and on my terms. People in my host city were more focused on just living and enjoying each other’s presence. Meals would last 3 hours and no one would voice a complaint, instead they would drink more wine and carry on authentic and expressive conversations. 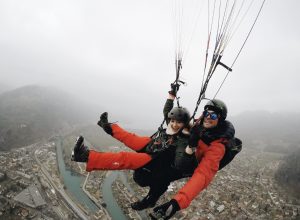 What was your favorite memory abroad?

It is hard to single out the best moment from the semester that will forever live on in my memories. When I reflect, I am taken back to the time I escaped to Interlaken for the weekend and went paragliding with some of my friends. We were squeezed in a van and transported up winding hills to a small town that overlooked Interlaken. We made friends with our instructors in the van and got to know their history with paragliding, luckily none of them were new to the sport! When we arrived at the top of Beatenberg, Switzerland where we could barely see land emerge from behind the clouds. The ground was covered in snow and we were slipping all over the place. The instructors took off before us and we were left to find our way down a slope to meet our guides and get strapped in. I didn’t even really have time to be scared because it was all happening a lot quicker than I anticipated. Before I knew it there was a giant pit in my stomach and my instructor and I were running off a cliff that I couldn’t even see. We lifted up and at last we were gliding through the air. The mountains around me were capped in snow and it was quite breezy in the Interlaken skies. Two eagles flew past us and in my head I was chanting U-S-A. The view of Interlaken from the sky was a remarkable image that I will never forget. This was the first moment during my time abroad that I did something daring that I had always challenged myself to do. 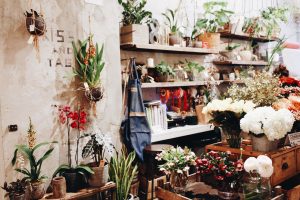 La Menagere is always bursting with flowers, which definitely adds to the delicate atmosphere.

Favorite thing to do in host city?

I loved to spend time at coffee shops, writing letters back home, journaling about my experiences, and doing homework. Most people could find me at Ditta Artigianale or La Menagere. I found that going to these places on a regular basis gave me more of an opportunity to interact with locals. I got to people-watch and study the interactions of Florentine’s taking a second to grab an espresso at the bar or having overly expressive conversations with friends. I felt as though I had my own part in their journey by sitting among them and partaking in the break of the day. I made myself a friend of these placed and felt comfort when I could stop in and take a breather from all the excitement that was engulfing me on the streets. La Menagere also had live music on Sunday nights which was a great reward to studying for the following week. 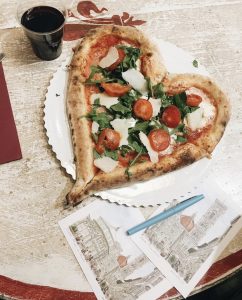 Favorite interaction with a local?

I found my favorite local eatery, Pizza Napoli, right underneath my apartment. I lingered in there one day to find the most welcoming workers and a shop full of authentic Italian character. One of the workers, Raj, became our local best friend and a familiar face when walking down the street. I got to know his story, his aspirations, and his interests all over small sittings of Napoletano pizza and red wine. Raj was gracious in sharing his time, knowledge of the Italian language, and friends with us. One interaction we had in the shop has stuck with me. He called over his two friends who shared a mutual appreciation for Pizza Napoli, Chiara and Federica, who struggled through Google translate with us for the opportunity to get to know us Americans. It was in that moment that I paused and realized that I was sitting at a table eating the best pizza of my life with three of the most welcoming strangers I could’ve dreamt of meeting while studying abroad. Chiara, Fedrica and I only understood small bits of each others language but shared universal laugher while creating failed attempts fluent conversation. We even promised to become pen pals with each other so that we could continue to learn each others language. We spent other memories with Raj outside of the shop, at coffee shops and bowling alleys. I ended the semester with a final meal at Pizza Napoli and even got to go behind the counter and watch the pizza making process. We all took pictures together and said final goodbyes. Raj and all the workers at Pizza Napoli captured a “pizza” my heart!