A great way of enriching your study abroad experience is connecting with locals, learning about their traditions and joining in the festivities! Florence is not only the birthplace of the renaissance but is also known for its ancient customs and Florentines take pride in practicing them even today. My favorite by far is Calcio Storico Fiorentino, also known as Calcio in Costume as it is a symbol of bravery and defiance. Initially, the game was played with clothing that represented each neighborhood and was originally only played by aristocrats every night between Epiphany and Lent. Even Lorenzo “The Magnificent” used to play! 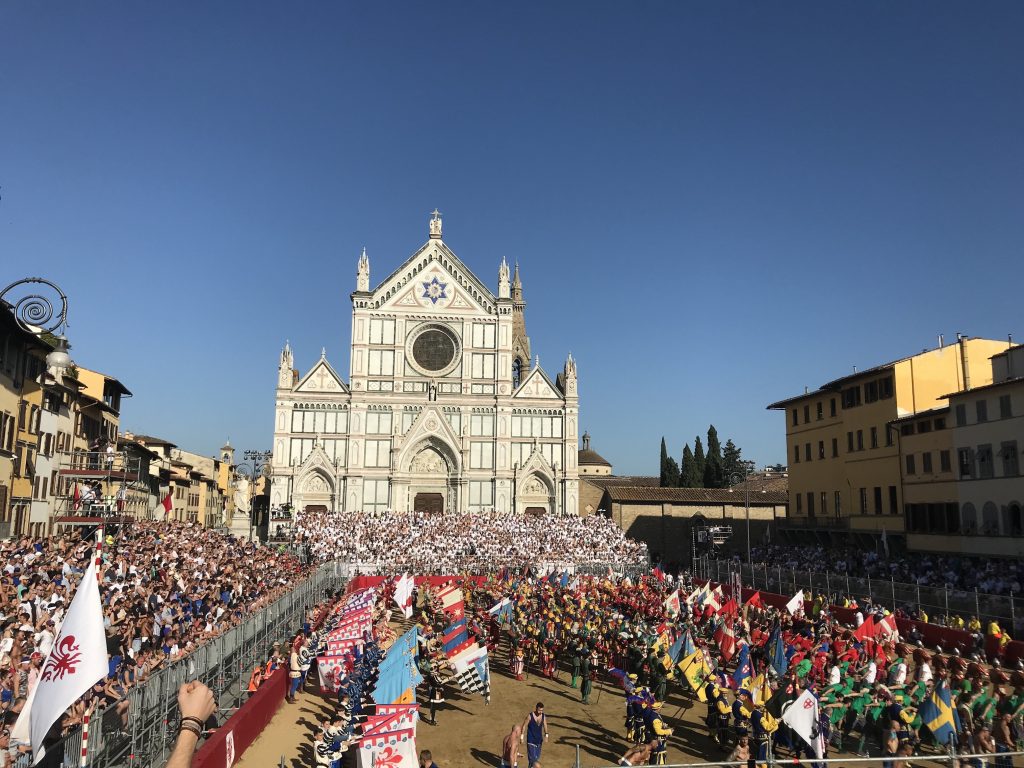 Piazza Santa Croce at the end of the procession minutes before the game starts!

Historically, the most important match was played on February 17th, 1530 during the invasion of the Republic of Florence by Emperor Charles V. Florentines decided to organize a big parade and a game in Piazza Santa Croce to prove their force while the city was besieged. On that day, 54 Florentine nobles faced each other in the match as a way of demonstrating their superiority and to mock the invaders. Every year, the city of Florence hosts the Partita dell’Assedio, “Game of the Siege”, a mock-up amicable match on February 17th in Piazza Santa Croce for free!
But, what does Calcio Fiorentino consist of? The game is based in many ways on contemporary sport disciplines. It bases its rules on today’s major team sports from soccer, to rugby to American football and even wrestling! 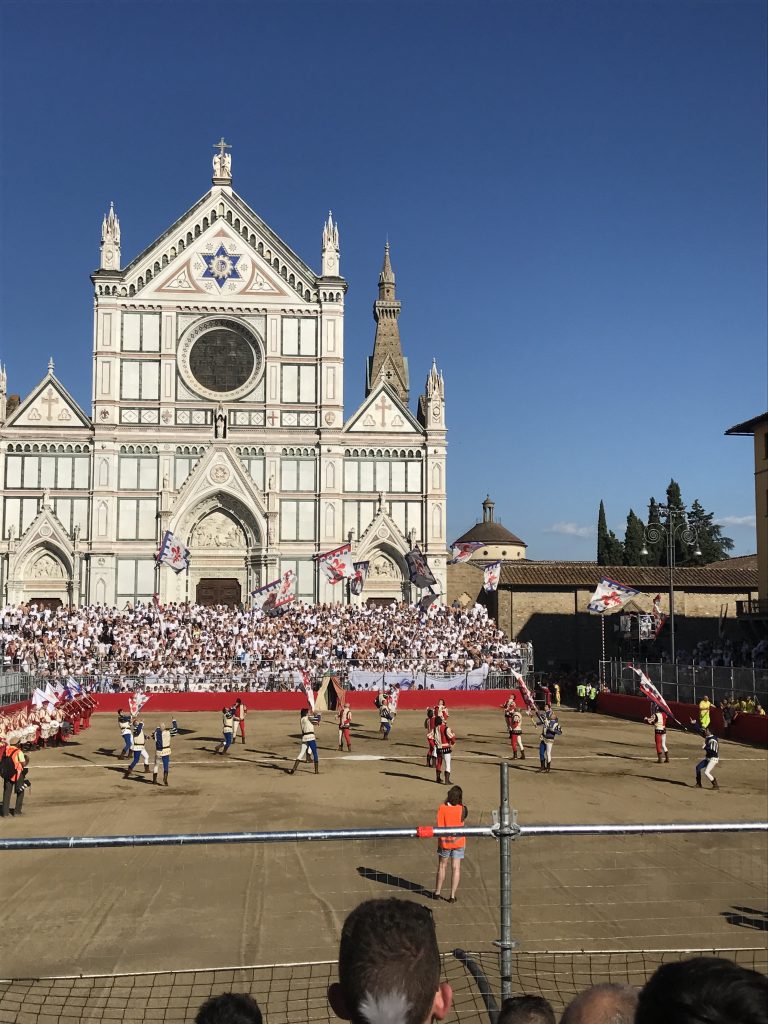 The parade includes a showcase of the “Banderiai degli Uffizi”

The basics of Calcio Storico Fiorentino:

Calcio Storico has recently regained fame and is played the same as it was done back then, the city remains divided in four neighborhoods, Bianchi (Whites) di Santo Spirito, Rossi (Reds) di Santa Maria Novella, Verdi (Greens) di San Giovanni and Azzurri (Blues) di Santa Croce (Forza Azzurri, Go Blues!!). Teams prepare all year to play and winning brings honor to their neighborhood, however, they also get a symbolic prize of a Chianina calf. 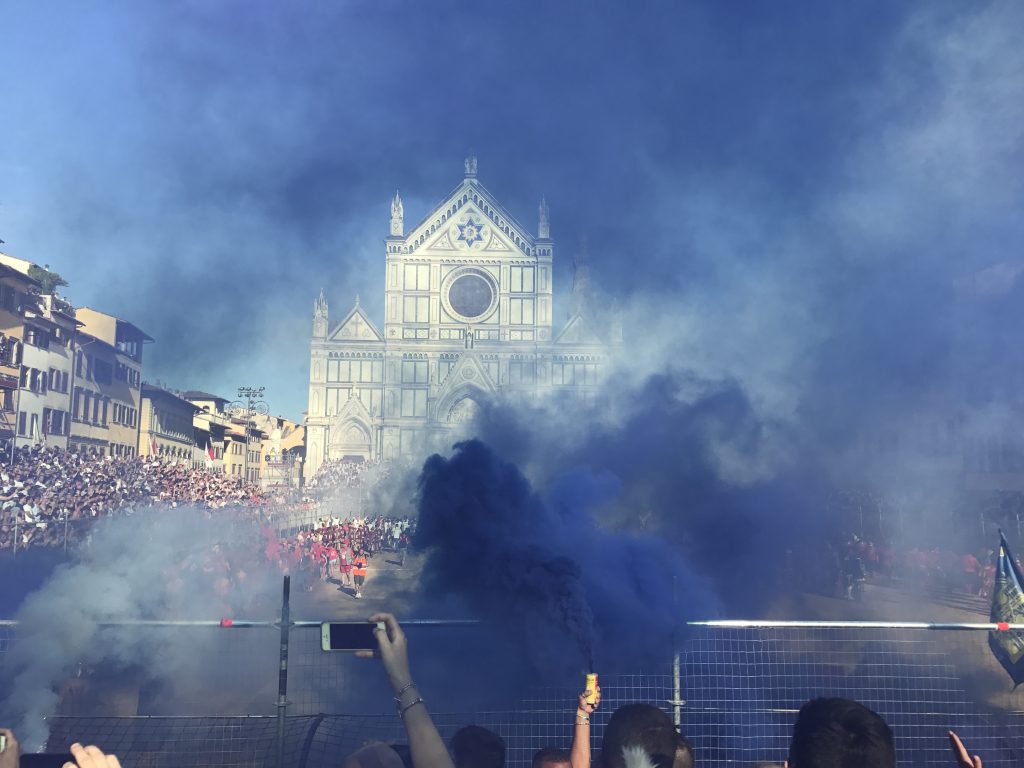 Blue smoke from the Azzurri bleachers

The tournament foresees two semifinal games in mid-June and one final on the day of the Feast of Saint John (Patron Saint of Florence) on June 24th. The actual game starts at 5PM but it is preceded by a procession of teams and historical figures that starts around 4PM. If you were planning on attending, I would recommend heading to the Piazza around 3:30PM to get good spots! (Even though tickets are numbered, these are rarely followed). Tickets for the games are sold out very quickly and they can only be bought in person at the Box Office at Le Murate. They are usually sold 1 or 2 weeks before the game and range from 29 to 80 euro. If you’re unable to get tickets, you can still join the festivities by watching each team’s parade that goes from Piazza Santa Maria Novella and heads through the city center to Piazza Santa Croce. The parade usually passes by Via De’ Bianchi, Via Rondinelli, Via Tornabuoni, Via Strozzi, Piazza del Repubblica, Piazza della Signoria, Via della Ninna, Borgo Santa Croce. The game is broadcasted live on the local TV channel: RTV38. Throughout the year, several mock-up matches are played, so feel free to ask the SAI office if any are coming up while you’re here!

The field covers Piazza Santa Croce on its entirety

Elizabeth is the Florence Assistant Program Coordinator here at SAI.

The SAI Florence office welcomes students to study abroad with SAI at Florence University of the Arts (FUA) and Polimoda Institute. Programs are available in the semester, summer, and jan and may sessions, as well as career certificate and professional master level.