Engaging in an international internship allows students to deepen their interaction with the host city’s culture, develop relationships beyond the classroom, enhance their professional networks and build their resumes. By participating in an internship abroad, students set themselves apart from their peers with a demonstrated ability to work across cultures. SAI staff works with students and their home universities to arrange internship placement based on their academic major, interests, career goals, knowledge, and skills.

This summer, SAI student, Carly Owens, studied abroad in Sorrento, where she took on a marine biology class as well as an internship. Her internship assignment was through the Marine Protected Area of Punta Campanella in Southern Italy. She is a senior at the University of South Carolina and is currently studying Public Health as well as Business Administration.

A word about the internship from Carly:

“I was assigned an internship position at the Marine Preserve at Punta Campanella working with the organization as well as with a partnering project, Project M.A.R.E. Project M.A.R.E is a group of 10 volunteers selected by the European Union to aid in managing & protecting Ieranto Bay in Southern Italy. My roles varied from gathering information about the project as well as the bay in order to effectively communicate what exactly we were protecting at Punta Campanella. I not only gained scientific information about the marine environment but also the organisms occupying this area but also the effects of human activity that has caused the bay to become a highly protected area. My roles as an intern were to document various events I saw at the bay with photos and videos, participate in numerous beach clean-up days, actively stop boating in fishing in the bay as well as join the communication team in efforts to create a plan for public outreach. My supervisor for this role was Domenico Sgambati, a head member at the Marine Protected Area as well as Sant’Anna’s marine biology professor.”

Some of her projects included: 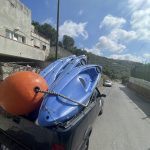 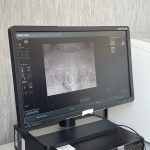 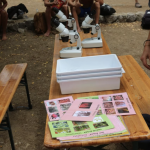 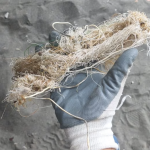 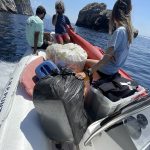 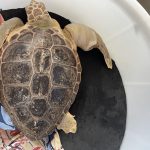 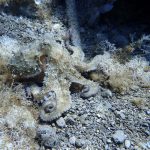 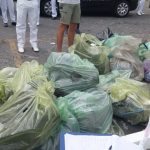 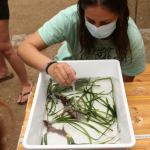 Awareness of the Global Issue Regarding Ocean Pollution:

As a result of my international internship, I have developed my involvement with a global issue being human waste polluting our oceans. I believe this experience answered all the questions I had prior regarding just how bad the situation is as well as how little awareness & emphasis is put on the issue among the human population. The means of developing this awareness took a great amount of hands-on work: such as kayaking through the bay collecting micro-plastic with nets, transferring the trash collected from the bay to a proper disposal method, as well as interacting with sea turtles who are hospitalized due to intake of micro-plastic & fishing hooks. This posed a great emotional challenge for me simply because I was experiencing firsthand just how bad the situation was & how quickly it was progressing. There were many times where I got discouraged seeing how little some people cared about the situation & the constant battle of trying to get people to understand the relevancy. As a result of these challenges, I came to realize the responsibility the younger generations hold in bettering the situation. With the presence of media in our culture, I found that spreading the word is more available than it ever has been and could be utilized as a very effective tool to bring awareness to the situation.

Working in southern Italy the work culture was a very obvious difference from the US when it came to organization & structure. In previous work experience, I knew my roles & daily duties very ahead of time allowing me to prepare & plan for what it is I needed to do. This experience posed an initial challenge of being very flexible & ready for anything that was needed of me that day. For example, some days I was needed to transfer 6 kayaks from the mountain to the bay on one pick-up truck & then the next day to create a detailed communication plan with my 3 European co-workers. My duties were very vast & diverse which caused me to find peace in the process & truly go with the flow. I found that even though the structure lacked, the ability to get things done & see true results were not sacrificed. Whether it was fieldwork or office work, I took these challenges & created a mindset that was ready for anything & whatever it may be that I needed to do I ensured I did it in the best way I could.

During this international internship experience, I was able to work alongside 10 Europeans of different ages, home countries, and chosen professional interests. From the start, I was very humbled to learn these individuals had chosen to dedicate 10 months of their time to volunteer for the marine protected area. I admired the interactions they had with one another, exchanging cuisines from their home countries, helping each other learn new languages & working as one to get the job done. From the first day, they welcomed me with open arms & were truly curious about my life, aspirations & interests. I faced a very obvious internal challenge when I came to realize that all I have ever known was not how it was in other places of the world. I dealt with this by choosing to be a primary listener rather than a speaker and truly absorbing everything my colleagues had to share. It was clear I was the least culturally aware among the group yet they embraced me & continuously educated me on where they came from & what was important to them. The biggest takeaway from this skill development was that there is a very big world out there, enriched with different cultures that deserve to be learned & that the initiative to want to learn is all you really need to bring to the situation.

Click here to learn more about our internship offerings!