SAI caught up with Ambassador Amanda, who answered some questions about her time in Rome.

Start a journal and keep up with it. Take lots of pictures but don’t let that distract you from the moment. Of course, take lots of trips but don’t forget to spend lots of time exploring the city that you are in. I was in Rome for four months and still have a long list of things I need to go back to see! Have fun, but don’t slack off in your classes. Being in class with people from all over the world is a really amazing thing and I had some of the best class experiences abroad. I learned a lot from the professors and the students. Be outgoing. Talk to people in your classes and make friends with the people in your program. Students that go abroad want to experience the world and want to meet new people. Some of the greatest people I have ever met, I met while abroad. Try the food! Europe has some of the best food in the world. They also eat a little differently than we do in America, but don’t let that stop you from branching out and trying something new. That being said, most campuses have a gym so use it a few times! I definitely gained a few pounds and it was very worth it, but I also made sure to stay active! Walk when you can. My neighborhood of Trastevere was beautiful and I found new places every day on my walks to class. You won’t get that from the tram! Enjoy every second of your study abroad experience. It goes a lot faster than you expect. 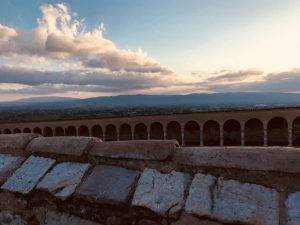 View from the top of a mountain in Assisi, Italy 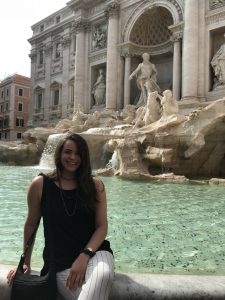 Me in front of the Trevi Fountain

With a city as beautiful and historic as Rome, it’s impossible to have just one favorite thing to do. Rome is so big that you could spend a lifetime there and never see everything. I loved to take new streets to class when I could, just to see something different. Trastevere is unbelievably beautiful and there is always something new to see. There are so many beautiful little stores, boutiques, cafes and restaurants. There are also so many churches in Rome. They are all breathtaking inside. It is so worth it to just stop and walk into them because you seriously will not believe the beauty that is waiting for you inside. You cannot miss the historical sites in Rome. Take some time to spend at each one, and if you study here, make sure to see them more than once! To name a few… The Colosseum, The Trevi Fountain, The Spanish Steps, The Roman Forum, Pantheon, Piazza Navona, St. Peter’s Basilica, Vatican City, Sistine Chapel, Castel Sant’Angelo, Piazza Venezia, Campo de’ Fiori, Circus Maximus, Bocca della Verita, Tivoli, Arch of Titus, Barberini Museum… the list goes on and on. My personal favorite was the Trevi Fountain. It is really and truly magical. Don’t forget to throw some coins in for good luck! Apertivo was also one of my favorite things to do. You can go to a lot of local restaurants and pay a flat rate for a drink and a small buffet. This is what a lot of Italians do before they eat dinner. My favorite restaurant was Grappolo de Oro. The cacio e pepe served there is to die for. But all in all, the best thing to do in Rome is to explore and see as much as possible.

The entire 4 months of my abroad experience was chock full of memories I will never forget. It’s insanely hard to pick my favorite one. But, I have to say, my trip to Paris sticks out in my mind. Paris is one of the most beautiful cities I have ever seen, and I got to travel there with two of my best friends whom I made abroad. While on this trip I got to go Disneyland Paris, and this was one of my best days of the semester. It just so happened that one of my best friends from home was in Paris for a trip at the same time I was. We were texting back and forth about our plans for Paris and the one thing we agreed on was that we wanted to spend a day in Disneyland Paris. The friends she was with did not want to go, and my friends wanted to, so the timing worked out perfectly. We impulsively bought the tickets the night before, at around 11:30 pm and then found out the tickets are not valid if you buy them the same day, it was part of some promotion where we got the tickets for a discounted rate. We made it by a half an hour! Then, when receiving the confirmation email, it told us that we needed to have the tickets printed in order for them to be valid. Where do you find a printer in Paris around midnight? We panicked, then my friend from home found a printer in a drawer of her Airbnb. She quickly printed the tickets and we were all set. The trip was working out perfectly. Then we decided since we only had one day there we wanted to get there when the park opened and leave when it closed. I took charge of this trip, which is something I normally don’t do. In the past I had let others plan our days and I would come along for the ride. I figured out the closet train station and how to get there. The next morning my friend came to our Airbnb bright and early, we stopped in a café for a couple of blueberry muffins and we were off. Turns out, the train station was about a 5-minute walk from our Airbnb. The ticket machine was so easy to use and conveniently labeled with Disneyland Paris. The ticket was only 7 euros. The train came every 2 minutes, so we got on right away. The ride was about 50 minutes to Disneyland and it dropped us off right out front. I had read on a Disney blog that you should purchase your return train ticket when you arrive in the morning, to beat the lines on the way back. We did this then walked right into the park. First things first, we stopped in the very first store to each buy our own set of sparkly Minnie Mouse ears. Then, we started the best day ever. We made our way over to Frontierland and picked up fast passes to Big Thunder Mountain Railroad. We then hopped on Pirates of the Caribbean. Then we made our way over to The Mad Hatter’s Tea Cups and It’s a Small World. It’s a Small World had a section in it for America which was very cool to see. It had a football player, a baseball player, The Statue of Liberty and a Hollywood section. I guess that about sums America up. After stopping for lunch and a few fresh Nutella crepes for dessert we used our fast passes for Big Thunder Mountain Railroad. I swear all the rides in Paris were so much faster and more intense than in Florida. Then, we went on HyperSpace Mountain. Then, after picking up one more fast pass for Buzz Lightyear Laser Blast, we decided to make our way over to the second park which was about a 5-minute walk. There we rode the Rock ‘N’ Rollercoaster, The Tower of Terror and our favorite, Ratatouille. Before coming to Disneyland, one of my friends was a little apprehensive about spending one day of our Paris trip in Disneyland. She even thought about staying behind and sightseeing Paris on her own. However, by this point in the day of our Disneyland trip, she was yelling at us to SPRINT so that we would make it to our last fast pass for Buzz Lightyear’s Laser Blast. With her encouragement, we made it. After that it was getting late and was almost time for the fireworks. We did a little shopping and I picked up gifts for my family and friends. We then watched the fireworks and stayed right until the park was closing. We passed the giant line to buy return train tickets, (thanks to that blog) and quickly jumped on the train and spent the entire ride home laughing and reminiscing about our great day. We then stopped at a restaurant in the city and had dinner and talked more about the best day. By all means, if you make it to Paris take a day and spend it in Disneyland! They always have deals going on that allow you to purchase cheaper tickets. Don’t forget to charge your phones, take lots of pics and don’t forget to eat a lot of crepes. (Seriously, the crepes in Disneyland were better than the crepes on the streets of Paris. I ate enough of both to give you a credible opinion.) 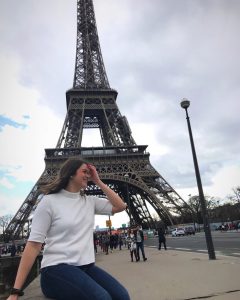 Eiffel Tower- make sure to see it during the day and night!

Amanda was a spring 2018 SAI Rome student from the University of South Carolina.