After months of preparing to study abroad, I finally arrived in Rome! The flight getting here was a bit stressful. Of course, with my luck, my suitcase weighed more than fifty pounds and I got to the airport later than I had hoped. By the time I arrived in Rome, I was ready to get to my apartment, unpack, and take a shower. Thankfully, SAI made it so easy to get accustomed to the city by setting up a meeting spot and providing transportation to my apartment. I got dropped off and brought my bags up. It was nice to get everything organized, and it made Rome feel like home. I met my roommates and we instantly became good friends. We were feeling a bit jet-lagged, but before we went to bed we had to have our first Italian dinner. We found a restaurant right outside our apartment and went in. Italian food definitely lives up to the hype and does not disappoint! 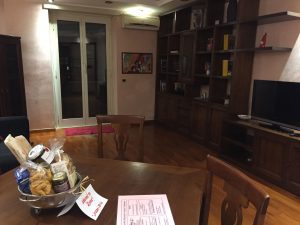 My living room – complete with gift basket from SAI

The next day, I woke up early to head to an SAI orientation. My roommates and I did not think to look up directions before leaving the apartment. We got a little lost and it took us about an hour to get to school. By the time we arrived, we were shocked with how long it took! Little did we know, the maps app on our phones took us on the “scenic route,” and the campus is actually not too far from our apartment at all. 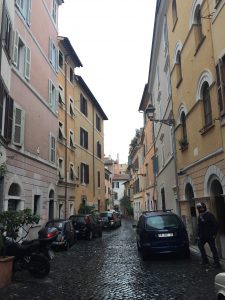 Walking through the quaint and colorful streets of Trastevere

The orientation through SAI was great because it provided a way for all the SAI students to get to know each other. I thought that it would be hard to be in a new country where I do not know anyone, but I met so many other people in the same situation as me. Everyone is so friendly! The rest of the week, I explored Rome with some of my new friends. Our neighborhood, Trastevere, dates back to medieval times and feels like its own smaller city. The name literally means “across the Tiber River,” and it is in a great location to easily get to so many landmarks in Rome. It is known for the great restaurants and nightlife. We also walked into the city center and found the Colosseum, the Roman Forum, the Trevi Fountain, and some other big sights in Rome. 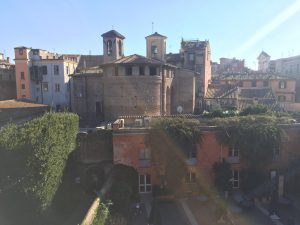 My first week was also spent sorting out the details. There are some things I did not consider before leaving home, like where to buy groceries. I found the nearest grocery store, an ATM near my apartment with no international fees, the student gym, places to buy tram and bus tickets, study spots on campus, and other necessities. Although it seemed overwhelming at first, little by little, I felt more confident. By the end of my first week in Rome, I looked back on all that I accomplished in so little time. I just had to remember to not sweat the small stuff and that the semester will keep getting better and better! 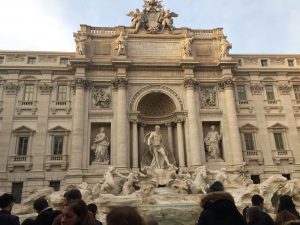 The Trevi Fountain, one of the landmarks I visited during my first week.