In honor of next month’s Sant Jordi holiday on April 23, our SAI Barcelona Program Coordinator Sandrine has provided a brief history of this special holiday. Also, our SAI Barcelona students will have the honor of celebrating this unique day with a memorable dinner and book exchange!

“Once upon a time, a long long time ago in the village of Montblanc, there was a fierce dragon, a noble horseman, a fair King, a princess, and scores of terrified villagers. As pasture animals were not enough to satisfy the dragon’s huge appetite, the King decided to sacrifice not only a lamb but also a virgin and, as the King was a very fair one, he included his own royal family in the list. And one unlucky day, the person chosen to be the dragon’s next meal was the King’s daughter, the beautiful princess…”

Can you imagine what happened when the Dragon was about to gobble up the princess? Oh, well…. You know how legends work.

“Along came the noble horseman Saint George on his white steed – his big sword saved the princess and slew the dragon. And then something extraordinarily beautiful happened: where the dragon’s blood fell, a red rose suddenly popped up. And Saint George, who was not only a noble horseman, but also a die-hard romantic, gave this rose to the princess.”

I just LOVE legends – the stories that people pass down from one generation to the next for a thousand years because it allows them to dream.

But I love this legend especially as it is the root of one of the biggest traditions in Catalonia: “La Diada de Sant Jordi”. Every year, on April 23, on Sant Jordi’s day in Barcelona and Catalunya the men (and in recent years more and more women!) give their sweetheart, their families, their friends, and their work colleagues, a red rose, and in return the ladies (or the men!) give the men (or the ladies!) a book. A book? Why?!

April 23 is not only famous for the legend of the noble Sant Jordi, but also for the commemoration of the death of two greats: Shakespeare and Cervantes, who both died on April 23, 1616. 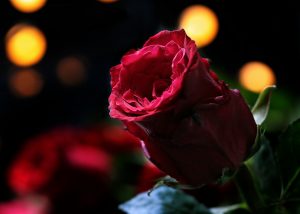 So if you are in Barcelona in Spring ’18, you will now know why so many stalls sell roses and books in the street in large organized markets. On average, four million roses and 500,000 books are sold in the whole of Catalonia for the holiday. And the city of Barcelona looks like this:

Our Barcelona in Spring ’18 students will celebrate April 2018, SAI Sant Jordi Dinner. We’ll be having dinner in a very special place and every participant will need to bring a rose or a book and say “Feliç Diada de Sant Jordi!” I CANNOT wait! Will you join us?