Coming to Sorrento, I was not sure of the places I would want to travel to, but the idea of going to a different country every weekend excited me. I was surprised to find out the first week I was in Sorrento of all the trips that could be taken by bus, train, or ferry for a minimal price and travel time. Sorrento itself is one of the most beautiful places among the Italian Southern Coast, so choosing to spend time elsewhere is also a difficult decision. That is why finding destinations close to my home city is optimal! 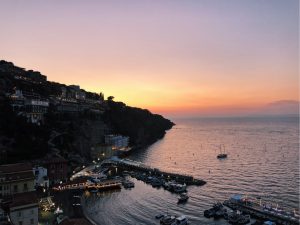 Sorrento- This is the view from our dormitory inside of Sant’Anna Institute. Being from Kansas, we only get to see a beautiful sunset occasionally, maybe less than once a week, but here in Sorrento, there is a painting in the sky every single night. I do not believe I will ever adjust to the view, as I am in awe as soon as a I walk out onto our deck. 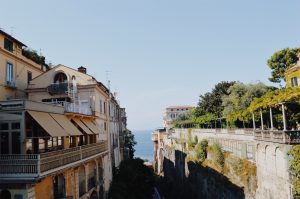 Sorrento 2- This picture was taken in the Piazza Tasso, the town center of Sorrento. This area is filled with many shops, pharmacies, and restaurants. With all the busyness of traffic and tourists in the square, this view becomes disregarded, but I always make sure to stop and admire. 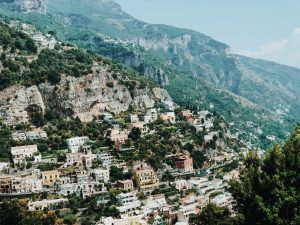 My first weekend trip I took was to Positano, which is another small village along the coast. This picture was taken from the bus ride there, though it was quite hard to capture it due to the motion sickness I was feeling from the windiness of the roads. The perfection of the houses and the way they were placed gracefully on the cliff was a view I could not stop taking pictures of. 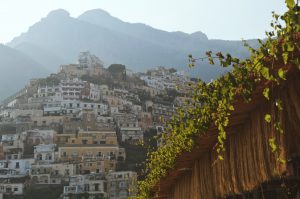 The view is what makes Positano as popular as it is. For me, it was the bright blue ocean, the houses, and the variety of plants that made this trip so special to me. 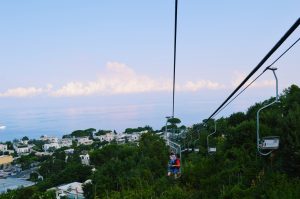 The second trip I took was to the Island of Capri, though it was just a day trip that was organized by Sant’Anna for all students to attend. This picture is from the ski lift that we took to the top of Capri, which led us over to Anacapri. 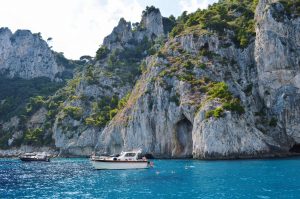 A group of us took a boat ride around the whole island of Capri. The waters were some of the bluest I have ever seen. 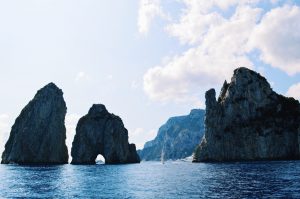 This is the same view from the boat ride that captures what Capri is known for- the three towering rock formations called Faraglioni. The legend is, if you kiss a special someone while the boat travels through the whole in one of the rocks, you will be in love with that person forever. 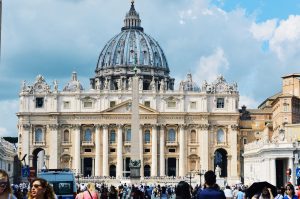 This was the first actual weekend trip that required a longer travel time than my previous trips around the coast. It was about a two-hour train ride and then we were set to explore the historical city of Rome. Our first stop was the Vatican, though we were only able to see a portion of it. This part of the Vatican is where the Pope presents himself to the Romans and waves down to them. 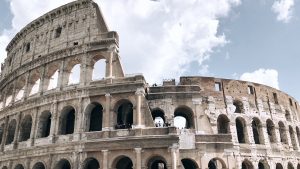 Our next stop was the Colosseum. I had seen pictures of this monument before, but they do not do it justice. Witnessing all the history that had taken place inside of it amazed me, but also the fact that it has been preserved this long so that humans in the twenty-first century are still able to see it. 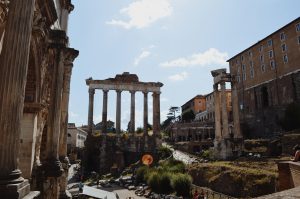 This part of Rome was in the Roman Forum- a great part of the city where ruins are spread around in great amounts. Around this area we were able to visit the prison where St. Paul the Apostle was imprisoned for two years.

Kelsey is a Fall 2019 Sorrento Student from Kansas State University.