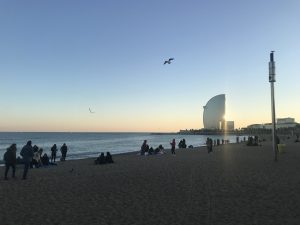 the W Hotel on the beach in Barcelona, Spain

What was your favorite class abroad and why?

My favorite class abroad was my Marketing Research class. In the past, all of my marketing classes have been lecture style with little to no student involvement and participation. However, in my marketing class at UPF, different group projects were assigned every week. Each group was given a specific marketing research strategy to conduct and had to brainstorm what the topic we wanted to study was; whether it be analyzing shopping habits in the grocery store, the most common age groups using the metro, or many more. We then had to meet outside of class and study that topic that we had chosen. I enjoyed this because we put the skills we had learned in class and applied them to real life marketing research, plus we got to explore the city of Barcelona in the meantime. We then had to analyze and present our findings which was interesting because all of the groups chose different topics but they all involved the city of Barcelona, so I was learning more about the city I was living in and topics related to marketing. 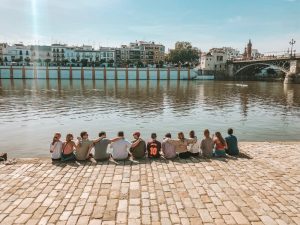 group of students on the SAI trip in Sevilla, Spain

My favorite thing to do in Barcelona was definitely picnicking at the Bunkers. My friends and I would buy cheese, crackers, and wine and walk for sunset. At the top there is a 360-degree view of Barcelona from an birds eye view and it is breathtaking. I never realized how big Barcelona actually was until going to the Bunkers and seeing the sun set over the huge city.

the Olympic Torch in Barcelona, Spain

What is your most memorable interaction with a local in your host city?

Our first time going to the Bunkers we got very lost. We were walking on the street looking very confused when a group of local young adults our age asked us if we needed help. We asked them how to get to the Bunkers and they informed us that they were going there as well and to just follow them. We walked with them the entire way there and ended up being friends by the time we arrived. We then sat with them at the Bunkers and it was cool to hear their opinions on living in Barcelona compared to my opinion as a study abroad student. 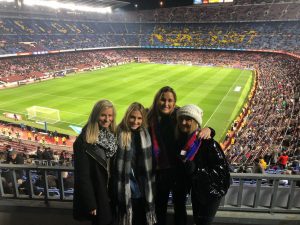 at the FCB Soccer game

Never sit an experience out. I used to be a lazy person and before coming abroad I told myself I needed to make a conscious effort to see and experience as much as I could in the few months I had in Europe. Whether it be hiking a mountain, going to the beach, or even trying a new coffee shop; the opportunities for exploration in Barcelona are endless. Doing things in big groups is hard because everyone has different schedules, so instead of waiting for a time that all of your friends can go to something, just go with anyone. Me and my friends found this to be much easier because we were able to see so much more of the city rather than only seeing those few main attractions at a time when everyone’s schedules aligned. 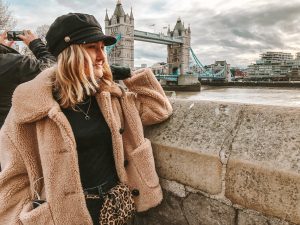 me in front of the Tower Bridge in London, England

Erica was a spring 2019 Barcelona student from the University of South Carolina.