When I first arrived in Paris for my fall semester, I remember my roommate telling me how she had heard of Reverse-Culture Shock: Essentially, returning home was a more difficult adjustment than coming here. I couldn’t really fathom it – how could returning home to the place I had always been be so difficult? It wasn’t until I stepped off the plane into Newark Airport – surrounded by native English speakers, burger joints, and sports teams T-shirts – that I realized it was real, after all. I felt strange and out-of-place in my own home country. Of course, it’s not home itself that changes – it’s you.

I went to the Cliffs of Moher in Ireland – the wind was brutal, but made my hair look nice here.

Prior to studying abroad, I never really took a break. Ever. My friends can attest to this, since there were more occasions than I could count where they tried to drag me out to a party on a Saturday night, but I stayed in to study. Sitting down and eating somewhere was a luxury – I usually would grab my food to-go so I could do my work and eat simultaneously at home. That all changed in Paris. Coffee “à emporter” (to-go) was a rarity that only the most tourist-y of places offered. In Paris, if you want a cup of coffee, you sit down, order a tiny cup of espresso, and spend at least the next half-hour drinking it. This was a foreign concept to me, but it soon became one of the first and most important things I learned in Paris: Take time for yourself. Whether it be at a party with your friends or even over a cup of coffee at a cafe, I learned that it was incredibly important to give yourself time to relax, decompress, and have fun.

Another thing I learned abroad was to try new things. For me, knowing I had limited time somewhere made me far more willing to try something I never thought I would. For example, I tried haggis in Scotland, which is defined as “a Scottish dish consisting of a sheep’s or calf’s offal mixed with suet, oatmeal, and seasoning and boiled in a bag, traditionally one made from the animal’s stomach.” It sounds pretty disgusting, but was actually good when mixed with other meat – which I wouldn’t have known unless I took the leap and tried it. I overcame my fear of speaking French in order to get a library card at Bibliotheque Mazarine, a rare manuscript library in Paris where I spent countless afternoons reading or writing. 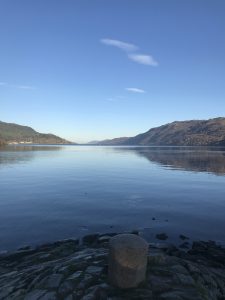 I took a day trip around Scotland one weekend and ended up at Loch Ness!

Which brings me to the last, and most important thing, I learned abroad: Don’t be afraid to fail. Being in a new environment – uncomfortable with the people, language, culture, etc. – was a challenge for me. The first time I went to Bibliotheque Mazarine, I absolutely butchered my French and misunderstood everything. The next time I went, however, I was more prepared and was able to communicate perfectly. Being abroad is a learning experience. You are constantly trying to understand the world around you, and sometimes, you misread a cue or don’t comprehend something. It’s incredibly frustrating, and it can make you afraid to put yourself out there. But being able to work past that – to get to the point where I had no fear navigating the city, or going to the library, or speaking to a local – is worth all the frustration and failure that precedes it.

My last night in Paris. About 10 hours later, I was on my flight home.

Adjusting back to the United States was, and is still a struggle. While in Paris, I was challenged to grow and change in ways I never have before. But I learned more than I ever expected I would – things I never would’ve learned, had I not left the United States. And for that, I am eternally grateful to Paris (and am counting the days until I can go back).