When Dominic Sondag first arrived in Florence with SAI Programs in August of 2009, he knew he always dreamed of becoming a fashion designer. It was within the classroom walls of an Italian palazzo in Florence’s historical center where his dream started to seem more like a career he could pursue. After a year of perfecting his skills at Florence University of the Arts (FUA) alongside some of Florence’s most dynamic artisans and professionals in fashion, he started to see his dream become an attainable reality. 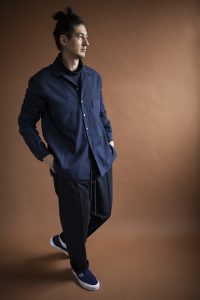 Dominic first began his fashion design career by working on the design team at London’s Chucs Dive & Mountain Shop. Then, he spent the next four years working alongside Engineered Garments designer Daiki Suzuki until he set out to create his own fashion house. Fast forward eight years later, and today he’s making his mark on the New York fashion scene. In fact, most recently he was named “one of the top 10 menswear designers to watch” by Acclaim Magazine, and one of “the 10 Most Slept On NYC Brands” by Complex.

Crafted with all-natural fabrics in New York City’s historic Garment District, his menswear line s.k. manor hill is known for its minimalistic lines inspired by Italy’s appreciation of fashion, history, and craftsmanship. He sources all of his fabrics from Japan and Italy to create clothing that cultivates a casual yet classic aesthetic.

To this day, Dominic attributes his time in Florence to helping him realize his destiny.  Studying fashion in Europe’s preeminent city of art was life-changing for his career.  Dominic will always be grateful for his time abroad, because it was Florence that helped him truly understand his destiny.

Recently, SAI had the chance to interview Dominic:

What was your first memory of fashion?

When I was a kid, all my clothes had to match. I was very particular about the shades of colors. I would get upset if my colors didn’t match. I would also lay out my clothes for school the night before.

Was there a class at FUA that really stood out from the others?

Yes, my favorite class was Introduction to Fashion, taught by a professor named Marco. Marco really helped me improve my drawing. 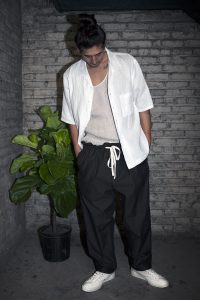 What was one of your favorite memories while studying abroad in Florence?

A memory that stands out is having an epiphany that my interest in fashion was actually an achievable dream.

What advice would you give to young designers?

To make sure you are very passionate about being a fashion designer. Also, I think networking is almost as important as skill.

What’s a typical day for you?

A typical day for me includes everything from cutting samples, fulfilling and shipping orders, and answering emails. 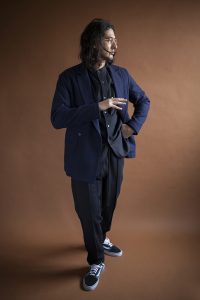 What do you avoid wearing?

Thong sandals. I don’t think they are a good look for men.

What accessory could you not live without?

Who are some of your favorite designers?

What are some of your hobbies outside of work?

I don’t have a lot of free time, but when I do, I enjoy playing basketball, going to the gym, and thrifting.

How did you come up with the name s.k. manor hill?

K is for “Kindred” friends & family, and anyone who supports the brand.

Manor is for my fashion house.

Hill is for nature and a journey to the top.