I feared the “language barrier” as I prepared to embark on my study abroad journey in Siena, Italy.

I practically screamed from the rooftops, “I am going to be studying abroad in Italy for four months!! All my classes are taught in Italian and I am living with a host family!! I am so excited!” And, without fail, whoever happened to be listening would ask, “How long have you been speaking Italian?” (Implying that surely I would not be traveling across the world to live in a place that I did not feel 100% comfortable in.) Each time, I would reply, “I do not speak Italian, but it is going to be okay! (Right?)” 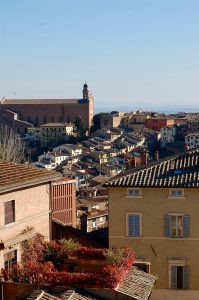 Once I had experienced this same exact conversation at least five times, I began to feel less prepared to learn and to try, and became increasingly more worried about living in a place where I could barely communicate.

Let’s fast forward… I’ve been living in Siena for about two weeks now… and guess what? I am okay. Not only do I successfully communicate, but I have formed relationships and I’ve had conversations that last longer than 5 seconds. I am being challenged, but isn’t that the point?

I have learned that the “language barrier,” as an ideology, has extreme consequences. Very simply put, it is othering. It suggests that the only way for humans to connect or communicate is through fluency of the same language. This is utterly false. Through my own experiences in Siena thus far, I have a newfound understanding of the innate similarities between all humans. The “language barrier” is a myth built on the fear of difference. This is not to say that interlingual communication is easy, but it is, in fact, possible.

A view overlooking Siena from a window in my home.

We, as students, are encouraged to immerse ourselves. If we accept the notion of the “language barrier,” then we are closing ourselves off to people who surround us, and thus, hindering immersion. The “language barrier” gives us an excuse for not trying. For example, sometimes my host mom will speak Italian, look at me, and wait for a response. There have been times when I look at her with doe eyes and shake my head left and right signaling that I do not know what she is saying. But, there have been other times where I use context clues, the little bit of italian I do know, and a smile to ask her “Puoi ripetere per favore?” From there, the air lightens, she repeats her question a bit slower, increasing my understanding as I am able to pick out keywords, and from there, I respond. We communicate despite the fact that I can only truly understand 50% of what she says. 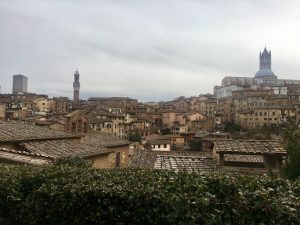 My view of Siena as I walk to class each and every morning.

Understanding is the beginning of immersion, and understanding is exactly what the “language barrier” bars us from. So, break it down. Refuse to accept its existence. And most importantly, be patient with yourself and the beautiful world around you. 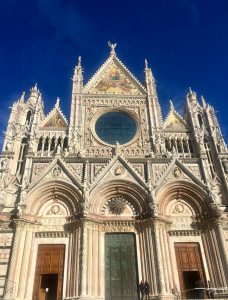