As an aspiring physician with an obsession for all things sports, the vibrant metropolis of Barcelona, with a strong independent spirit, was able to offer the best of both worlds. Two of the highlights of my month-long trip overseas (my first ever) included walking on the legendary and hallowed grounds of Camp Nou, where FC Barcelona plays, and touring the campus of the Hospital de Sant Pau, a UNESCO World Heritage site. I was also fortunate to have my Spanish class housed within the hospital complex, in a building known as the Casa Convalescencia, which is an example of the Modernisme (Catalan modernism) style found all over Barcelona and made prominent by Gaudi, Domenech i Montaner, and others. 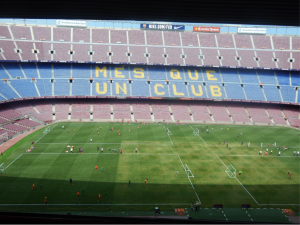 Mes que un club, an homage to the team representing all that Catalonia stands for.

In high school, one of my Spanish teachers inspired my love for Spain by incorporating elements of the culture into our assignments and activities, and also emphasizing vosotros, which came in handy in Barcelona. I gradually grew more and more infatuated with the history and traditions of the country, and I had an admiration for the concept of the siesta, which I obey steadfastly myself. Accordingly, I started following athletes such as Pau Gasol, who happened to play for my hometown Los Angeles Lakers at the time, Rafael Nadal, who I was lucky enough to recently see in person, Andres Iniesta, a key component of the World Cup-winning national team and numerous other titles, and of course Lionel Messi, who is considered a deity by some, and certainly at Camp Nou, where his accomplishments are immortalized.

I took a special interest in Pau Gasol because coincidentally, he originally wanted to become a doctor himself before he decided to pursue basketball (how’s that worked out for him?). Nonetheless, he still gives his time by volunteering at hospitals and visiting with patients. It didn’t hurt that they are extremely successful at what they do, and I became a diehard fan of all of them the more I watched them play and lead their teams to championships. Hence I developed a bucket list item of traveling to Spain and witnessing an FC Barcelona game, the latter of which unfortunately didn’t come about since it was the offseason in the Spanish league (La Liga) while I was there, but I am grateful to have at least studied in Barcelona since my original plans kept getting postponed because of funding and scheduling conflicts.

The sprawl of Barcelona

Once I finally arrived in Barcelona, it was more than I could have imagined or expected – there were billboards/advertisements featuring Gasol and Iniesta throughout, and the UEFA EURO tournament overlapped with my time there, creating an even more festive environment in the pub directly beneath the apartment I resided in, just a block from the awe-inspiring Sagrada Familia, which is obviously a must-see.

On a perfect summer day, I ventured to the neighborhood of Les Corts in the western half of town with two of my roommates, camera strapped around my neck, via subway (much more connected and efficient compared to the system in Los Angeles), but which is a tad crowded and requires a little bit of getting used to with all the different routes. As we approached the stadium, I could hardly contain my excitement and couldn’t believe the opportunity of a lifetime was becoming reality. Camp Nou was grander in person than any picture I had seen – a whole museum dedicated to the team and how it has grown into a global brand, with endless trophies and artifacts and interactive displays where you can re-live Messi’s magical goals, a massive store, which I bought quite a few souvenirs from, and a chance to walk through the press room and locker rooms and sit in the stands and suites. There was a tournament for youths on the field that day, so we observed for a while and took it all in, and it hit me that some of the greatest players in history stepped foot on that pristine grass. A renovated Camp Nou is in the works, and I can’t even fathom how spectacular that will be.

As if Camp Nou wasn’t incredible enough, being able to walk past Sant Pau every day on the way to class along Avenida de Gaudi was an additional treat. Another Sant Pau has been built, but the old hospital still performs some services such as blood banking and has been turned into a monument and restored for its significance in advancing medicine and its architectural beauty, while nowadays also hosting talks, concerts, and other events. As one of our first program excursions, we toured the facilities, which were absolutely breathtaking and jaw-dropping – a garden-like oasis with lots of open space that allowed patients to get closer to nature and would be prime grounds for a yoga or meditation session, stunning stained glass windows, splendid staircases and ceiling art, and most importantly, very conducive to healing with the natural light. Our program coordinator accompanied us and told us its background and history, and we examined various exhibits such as one showcasing artwork from patients.

Immediately upon going inside there was an impressive miniature model of the complex that gave me an idea of its size and scale, almost a city in itself. My description does not do it justice – you will have to judge for yourself – however take my word for it that the buildings were crafted with the utmost detail, intricacy, and meticulous planning. If I ever had to stay at a hospital, this would be it. I have little training in the arts, but I definitely appreciated the enormity of the efforts to construct and preserve the buildings and the influence and lasting impact Sant Pau has had on the landscape of Barcelona and Catalan architecture. 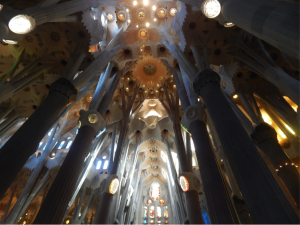 A sample of Gaudi’s brilliance

I could go on for days about my life-changing, memorable adventure. Oh how I miss you Barcelona – I have barely scratched the surface of experiencing everything that you have to offer, and I hope we cross paths again in due time!

– Binh was an SAI Barcelona student in summer of 2016 from the University of California Los Angeles.