In the normal world, being lost is not a good thing; it is to be avoided at all costs. However, during your abroad experience, I would suggest you do get lost in your new city. (Of course make sure you have the right tools to find your way back home if you get really lost; I would suggest CityMaps). Being lost is the best way to discover all that the city has to offer and it helps to memorize the streets better! Living in a new city that speaks a different language and acts a little different than you are used to can be overwhelming at first, but taking the time to get lost in the culture is the best way to really learn about your new home.

Wandering the streets of Florence to see how many different signs we could find.

Often times, the best restaurants are the ones that are off the beaten path and have the locals inside. While the restaurants that are tourist attractions are not all bad, try to branch out and engage with restaurants where the locals hang out. This will help to embrace the culture and make friends with people who can help you discover what it is really like living in your new city. I will admit that the first time I became “lost” in Florence I was a little worried. It was during my first week exploring the city with my newly befriended roommate. We thought we were lost, but little did we know we were in a piazza that was only two streets down from our apartment. We just had to keep exploring and within ten minutes we found a familiar street and were unlocking our huge apartment door in the next 10 minutes. As our explorations continued throughout the semester, all of my roommates referred to the piazza as “ya know, the one we always get lost in”. Being lost allows for critical thinking, attention to detail, and the practice of always having a positive attitude. More often than not, you are not as lost as you think you are. 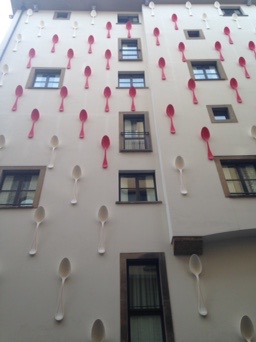 One of the many forms of art I happened upon.

Soon, being lost will not feel like being lost anymore. Side streets will become your friend as you learn the short cuts to avoid crowds. Small, hidden restaurants will become some of your favorite places to eat. Best of all, you will really feel like you embraced a new culture because you took the time to get to know the areas that a lot of visitors do not. Being lost allows for the opportunity to find yourself. If you do not allow yourself to become lost, then you will never know what adventure you could be missing out on. By the end of the semester, I allowed myself to be lost so many times that being lost became a welcomed challenge. Trusting myself became a lot easier and being lost in Florence was a lot harder. At the end of the day, that’s one reason why we all went abroad in some shape or fashion: to find ourselves. 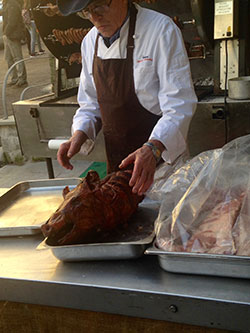 Chestnut festivals are pretty popular during the fall, so we found a small village called Marradi that hosts a fun festival.

The reward for struggling our way to the top of the chocolate festival.

One of the most random and fun museums we happened upon was found in Amsterdam. The cheese museum provided us with entertainment and a hearty snack.