One minute I was dozing off in the drone of Florentine traffic, and the next, I was awoken by gasps and awes. I slowly rose from my awkward slumped position of rest to join in with the group’s amazement. I looked out the window to see the thick woods of the mountain we were climbing, but in the breaks, there was a quick peek as to what was to come. As we turned the final corner, and the bus started to slow, we understood why. Beyond this point was no terrain for a bus. Greeted by the hum of a big rig, we had reached the base camp. We got out and before us stood a rugged diner with the backdrop of what we had come for, the marble quarries of Carrara. This fine establishment’s usual customers were the marble men of the mountain, but today they served my tourist crew, and me. I felt sort of bad that we had cleared out all the morning pastries, but that gave the gentlemen who followed us in an excuse to have pizza for breakfast; who could complain? After filling our tanks, we geared up with the traditional dress of the quarry people. 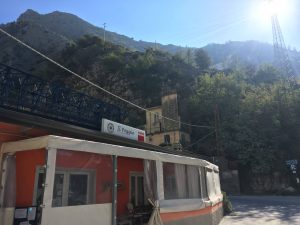 Reflective and ready to go, we piled into the back of a beastly truck. Not a paid promotion, but climbing up the tight mountain side roads in that ~Land Rover Defender~ was really thrilling! As our driver skillfully changed gears to cut around the many switch backs, it became apparent how intense the work done here must be. I had envisioned the hard hat being my protection against falling rubble, but it also helped with my tall stature fighting with the roof during the extremely bumpy ride. Following the many good laughs at the extreme ride, we reached our destination. Just below the peaks we had a clear view of the mountain being tediously chunked away. Our guide explained the process of excavating such a dense material, it was quite fascinating. Two main holes are cut with a diamond tipped drill bit, both leading to the back corner. After that, a larger cutting cable is roped through the holes and cuts in each direction over the course of 2 days. In total, each 200 ton block of marble takes around 8 days to extract. The marble is then broken down based on its natural veins, keeping it in the largest pieces possible, before being trucked down the mountain. 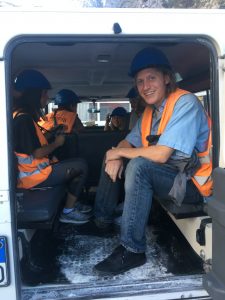 Piled in for the ascent

Class on the process of extracting marble 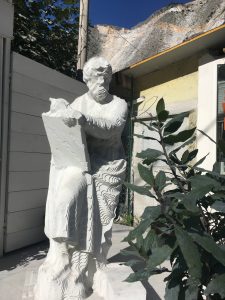 Marble statue in front of the gift shop

After this short lesson, we followed the road back down that millions of tons of marble have gone down before us! I can not even imagine driving a vehicle with such a large load on these steep dusty paths. We asked our guide how dangerous this job was. He replied by saying nearly nine out of ten workers end up being injured in their time working here… Really makes you appreciate kitchen counters a little more! Before leaving we entered a gift shop that displayed numerous ways this precious stone could be transformed! Mini replicas of ‘The David’ to rolling pins and collectible eggs, this shop had it all! One of the last sights here was a sculpture outside the shop that merged a modern pixelated cubist style with antiquity. This marble figure made me reflect and wonder how this industry was ever feasible in the ancient times. I left this trip was a new frame of mind to view all things made of this rock. Now more than ever, I will look at the prized Duomo with baffled respect for the almost incomprehensible labors it must have taken to be in my presence. 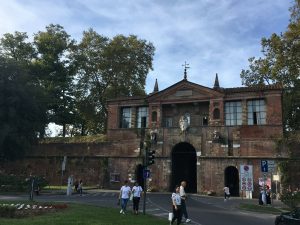 Stairs leading to the top of Lucca’s wall

After a quick ride through the rural beauty of Tuscany, we arrived at our second destination, Lucca. Entering the hefty ancient walls reveals what a beautiful treasure they have preserved. As our guide put it, the architecture here breaks all the fundamental rules. This rule breaking allows for buildings to strangely merge and for asymmetrical layouts to shine. After a short walk down a few blocks of picturesque streets, we arrived at where we would be having lunch. The three courses and dessert went by quickly thanks to the good company. The long format of meals here will be something I really miss about Italian culture. It leaves plenty of time to chat, and have the seemingly necessary debate over what which type of water is better: frizzante (sparkling) or naturale (still). It seems I am usually on the losing side of this feud.. long live frizzante! Once scarfing my apricot pie down in mere seconds, I concluded my marathon of a meal with a tall cup of joe. With our appetites satisfied once again, we took to exploring the streets! 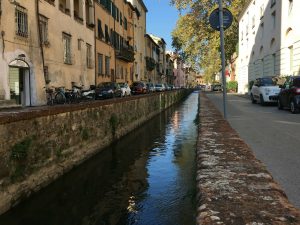 On top of Lucca’s wall

The final hours of this adventure induced daydreams of a time in the future when I could perhaps call this magical place home. The slow pace of the locals and the cozy feeling of being embraced by the walls puts your heart at ease. Candy shops and local produce sell itself to you at every corner. The open air markets fill the air with exciting scents that tease your nose with delight. This city may feel like heaven, but that could just be due to the 51 churches that are sprinkled about. The walls here are basically just an elevated park that circles the entire town. I spent the remainder of my time surveying the happenings of this charming place. The green space was well welcomed after being on cobblestone for much of my time here in Italy. We met up in front of the expansive palace that Napoleon’s sister once ruled over this city from, and we were back on the bus on our way to Florence. This ends one of my favorite experiences thus far in my time abroad.

Allan is a fall 2018 SAI Florence student from Indiana University of Pennsylvania.