It’s so god-like; the way the sun creeps through the details in the gates, the architecture, and the ceilings of various basilicas and cathedrals. The crows sincerely flock amongst the highest pillars, statues, and apartment complexes. Flowers cover terraces and rooftops, as if everyone had a garden. Everything created here seems inspiring enough. Romans cared, and still do, about glorious, gigantic creations. These things, like Rome’s many historical monuments, are not so easily found in America. 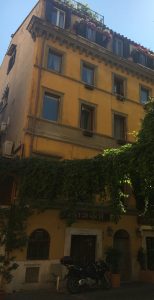 There are differing gradients of beauty on each street. Vines spiral up the buildings of Trastevere. It’s no wonder why movie producers choose to set their films in Rome. But of course there could be so many plays, poems, and operas about Rome simply because of its multiple historical identities and conquerors. This also makes it impossible to, both, know and understand. The many layers have grown firmly against each other, having a complexity which is unable to be separated and analyzed.

I’ve had the chance to accustom to a wild place. At first, I noticed things like crooked, foreign trees. I wondered if I could find anything cheap to buy. I admired the constant activity from the view of my high window. When I opened it I felt connected immediately; perhaps the outside world and I were sewn together by street music. I could not grow away from it; I was hearing accordian music in my own experience of Rome, rather than a stereotypical version. After a month or so, I came to recognize certain thin streets where cars would come so close to my body, certain shop workers, and certain musicians.

I don’t know how many hotels, hospitals, and streets I’d have to walk through to understand this city. Or, to even feel like I’m here. But maybe, I know that I’m here through seeing so many wine corks caught in the cobblestones beneath my tired feet. And through hearing the clicking of glasses and utensils as an essential part of my simple journey to class. Fountains that run and churn. Walls which are cracked and are discolored oranges from years of withering.

People run and cross and walk around Rome’s ancient ruins, which is a peculiar idea and acknowledges our modernization. The tourists tell me where to go as much as the Romans do. There are thousands of people here who exchange conversations and sips of wine. They eat and drink on the steps. They engage, grow, and move on just as quickly. I admire and frown at the thought of our constant consumption, which Rome provides for me visually. 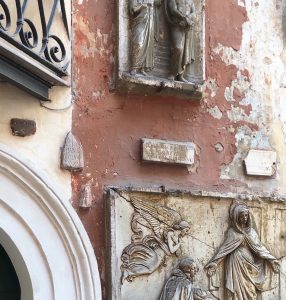 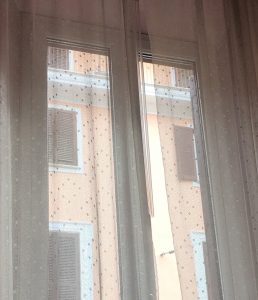 View from my apartment

Although my responsibility to the destruction that has happened here is small, short and unlike the destruction caused by many Romans of the past, it’s still true. For example, I will always remember the startled Roman pigeons who fluttered away from my clothesline because of my human disturbances. I know that no blood was shed, but I still want to apologize.

Kaylyn was a SAI Rome summer 2018 student from the University of Georgia.