One of my favorite excursions while studying abroad in Florence, Italy, has been exploring the historic, well-preserved medieval towns in Tuscany. It’s easy to get into the groove of using the weekends to travel outside the Florence area, but I encourage you to visit the enchanting towns that sit between the Tuscan hills and wide-spread vineyards. On my SAI excursion last weekend (the trip is included with SAI, so there are no extra costs), we ventured to the medieval town of San Gimignano, followed by a relaxing dip in the thermal baths at Antica Querciolaia Terme in the province of Siena. Below, I captured the highlights from our day trip, enjoy!

Our first stop was San Gimignano, a small medieval town located on a hilltop province of Siena, Tuscany, in north-central Italy. Because of a 1282 law enacted by the government of San Gimignano, the demolition of old homes was prohibited, leaving the town well-preserved and rich in medieval traces. This is visible today through the dozens of towers that still hover over the town. When we arrived, we were greeted by our tour guide at La Porta San Giovanni, the main south gate that leads into town.

Frescoes dating back to the 14th century inside the historic, well-preserved Duomo di San Gimignano

One of our first spots to visit in San Gimignano was the Duomo. But, don’t let the outside of this Duomo deceive you. While we are used to the extravagant exteriors of the Duomo’s in Florence and Milan, this church has a pretty simple look on the outside. Once you enter, you are greeted by walls covered in frescoes dating back to the 14th century — ones that have never been restored. On the right, you will see a series of frescoes dedicated to the Old Testament painted by Bartolo di Fredi, while on the left, you will find those of the New Testament. Some of the frescoes were affected after San Gimignano was bombed during World War II, but are still incredibly preserved. The Duomo is definitely a must-see when you are visiting San Gimignano.

Tasting Some of the Best Gelato in The World

After exploring the town and taking in the breathtaking views, we had a 30-minute break to explore and get a bite to eat. We decided to stop at Gelateria Dondoli located right in the center of town. Gelateria Dondoli is an award-winning gelato parlor owned by Sergio Dondoli. The gelato captured the title of world champion twice in 2007/2008 and 2008/2009. After a long time trying to decide what flavors to get, I settled on one scoop of the Rosemary Raspberry and one scoop of Cioccolato con Nocciole. It was delicious! 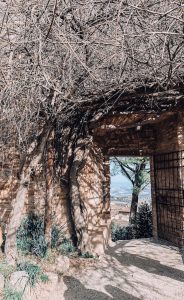 One of the most picturesque spots in San Gimignano, a door opening that looks out into the Tuscan countryside.

Taking a Dip in Thermal Baths at Terme Antica Querciolaia

After leaving San Gimignano, we made our way to Terme Antica Querciolaia in Rapolano Terme, located in the southern hills of the province of Siena. Thermal baths and hot springs have been used for thousands of years. Antica Querciolaia Terme, the baths where we enjoyed, date back to the 18th century. In this system, the waters flow from the subsoil of three springs to different temperatures ranging from 39-40 degrees celsius to 22-24 degrees celsius. The baths include large quantities of minerals that are said to help blood flow, circulation and metabolism, among other wellness benefits.

Views from the thermal baths in Terme Antica Querciolaia in Rapolano

After a relaxing time submerging in the thermal baths, we hoped on the bus back home to Florence and watched the sun set over the hills. I strongly recommend taking advantage of SAI’s local weekend trips, especially to San Gimignano and thermal baths!