36 years ago today (July 31, 1980) the #1 song on the Billboard charts was Magic by Olivia Newton John. Perhaps it’s no coincidence that both J.K. Rowling and her famous character, Harry Potter, were also born on July 31st (1965 and 1980, respectively). What better way to celebrate the birthday of the two biggest names in the wizarding world than with a Harry Potter adventure? If you can acquire a portkey to London, you can fit a lot (and I mean, a lot) of Harry Potter-themed fun into three days. I should know – I recently spent three days in London hopping from one wizard-themed activity to another. What follows is a beginner’s guide to exploring Wizarding London in 3 days.

First are the basics: Travel & Accommodation

Since we muggles don’t have the ability to apparate, we have to rely on other modes of travel. Thankfully, the most prominent and convenient form of transportation also doubles as a Harry Potter landmark! Start your journey around London at King’s Cross Station and visit Platform 9 ¾ or the Harry Potter gift shop before hopping on the tube and heading off to your next destination.

While there are no active steam trains operating out of King’s Cross, you can always explore your options for day trips on a steam train.

If you want to travel in real wizarding style, nothing beats the Georgian House’s “wizard chambers“. However, these are quite pricey and have a long waiting list, so start planning and saving well in advance!

If the Georgian House isn’t in your budget, you can do what I did and book a room at Palmer’s Swiss Lodge hostel. Rooms range from $19 for a shared dorm to ~$100 for a private ensuite. While not explicitly wizarding-themed, you can’t help but shake the British boarding school feel of the place. Some of the shared rooms look straight out of the Gryffindor dorms (complete with red drapes and a trunk under your bed) and there is even a coat of armor to greet you on the stairs!

Harry Potter and the Cursed Child at the Palace Theater

On Day 1:
We arrived in London early afternoon and had tickets for the 7pm showing of Harry Potter and the Cursed Child at the Palace Theater. What better what to kill time in London than to visit a museum and do a bit of shopping?

Womping Willow at the Tate

Our first stop was the Tate Museum. On the walk to there, you may pass Millennium Bridge, which is shown in the opening scene of The Half Blood Prince. During our visit, there was an exhibit on display that looked remarkably like Hogwarts’ famous Womping Willow tree.

After the Tate, you can head in the direction of Oxford Street for some shopping. While exploring the massively large Lush store, I found some great wizarding ways to relax, from a “Divination” bubble bar to a “Cloak of Invisibility” bath oil melt…these magical products can help you relax after a long day of walking around London.

At this point, hunger started setting in. We searched in vain for the Leaky Cauldron, but instead found a good substitute for the 3 Broomsticks, right around the corner from the Palace Theater. You can sit around the typically English 3 Greyhounds pub and have a plate of Fish and Chips (my personal favorite) or an Afternoon Tea.

Finally, when the evening rolls around, it’s time to see Harry Potter and the Cursed Child! Photography is not allowed inside the theater and J.K. Rowling has implored viewers to #keepthesecret, so I won’t speak much about the play except to say that the effects are mind-boggling and I am desperately hoping that Scorpius Malfoy will one day get his own spin-off. The play is spread over two nights and lasts about 2.5 hours each night. You should expect for the play to let around around 10pm.

Pro-tip: Do like the locals and buy an ice cream from the cart during intermission!

The Market Hall at Borough Market

A great way to start off your second day is to travel to London’s oldest food market for some coffee, a baked good, and some Harry Potter sightseeing.

At the market, down Stoney Street, you can find the filming location for the Leaky Caludron from the third Harry Potter film (now home to a restaurant called Chez Michelle) and in the center of all the action you will find the Market Hall, a glass structure which contains seating against a backdrop of thriving plant life. This is a great spot to enjoy your breakfast and pretend you’re in Madame Sprout’s greenhouse.

On our second day, we had reservations for a wizarding themed “enigma quest” in the afternoon. At noon, we had reservations to do an “Escape Game” at Enigma Quest. Their website describes the “School of Withcraft and Wizardry” challenge as follows: “Ever wanted to have magical abilities? Still haven’t received your letter from Hogwarts? You now have a chance to graduate from the School of Witchcraft and Wizardry and prove everyone that you are a true witch or wizard! This is not an easy task, and will require you to be focused as never before. Your team will face obstacles and tests requiring cooperation and some bravery. Remember, every minute counts! On your quest to becoming a witch or wizard, you will learn new skills and gain knowledge to help you pass all exams and defeat the dark forces. Are you ready for the challenge?”

The “quest” lasts approximately one hour and is incredibly fun and challenging. We scored a perfect on our O.W.L.s, in case you were wondering… 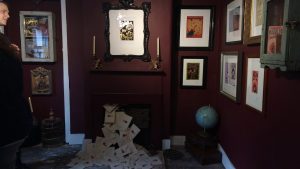 On our way from the Enigma Quest to the Palace Theater, we stopped at the House of MinaLima, an art gallery that was housing a Harry Potter pop-up shop. Across four floors was an assortment of Harry Potter themed artwork, life-sized installations and props from the movies. Almost all of the items displayed are on sale in the downstairs shop, as well.

Our second day ended with the conclusion of Harry Potter and the Cursed Child. One thing I will say is that the less spoilers you encounter before seeing the play, the more enjoyable your experience will be – so don’t give in to temptation!

Pro-tip: If you arrive early to wait in line, make sure to walk past the Stage Door along the side of the theater. As we were walking to the entrance, we randomly encountered Noma Dumezweni (Hermione) and Paul Thornley (Ron Weasley) outside for a smoke break. If you would like to greet the actors or get an autograph after the show, that’s also the place to be.

Our third and final day in Wizarding London was spent entirely at the Harry Potter studio tour. Two things to keep in mind when planning your visit: 1) You must book a tour in advance, at a specific time and 2) The studio is located on the outskirts of London. So, make sure you have ample time to travel from the center of London to the studio in time for your tour!

The studio recommends allowing 3 hours to explore the studio tour. This seems like an extreme amount of time at first until you step foot through the Hogwarts doors and realize just how much there is to do and see. Every single item in the self-guided tour is authentic from the films and many of the exhibits are interactive. You can buy chocolate frogs and butter beer throughout and even take a photo on the bridge of Hogwarts. You will want to leave yourself an extra hour at the end to explore the massive and amazing gift shop. After much deliberation, I left with some chocolate wands, fudge flies, a cauldron and a Harry Potter coloring book.

If you happen to have an extra day or are looking for an alternative to any of the above activities, you can also take part in a “Muggle walking tour“.

Information about and tickets to Harry Potter and the Cursed Child can be found at harrypottertheplay.com.

After three long, fun-filled days in Wizarding London, it was time to return to the Muggle World and anxiously await the release of Rowling’s newest tale: Fantastic Beasts and Where to Find Them.

Kate Pitts is University & Student Relations Manager at SAI, and works out of Pennsylvania. Kate holds a Master's Degree in Comparative and International Education, and loves travel and spending time with her dogs Charlie and Fred.