There was a dog I never met in Florence. He was a little guy, mostly white with some ink splotches, and he had a hard time walking. Yet his owner, upright and undeterred, would walk him down a street near mine whenever night fell. During my time attending FUA this summer, seeing that dog and his patient owner was as much a nightly routine for me as walking seemed to be for them. 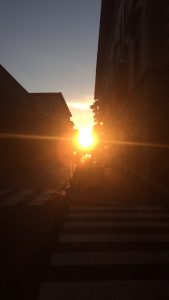 Sunset in the City

The little guy would try mightily, but something, physical or mental, wasn’t letting him stay on track. Focused as could be, he’d lift his right paw but lose his balance while deciding where to put it, tumble to his shoulder before rumbling back to his feet to try again. His owner would take a couple high-heeled steps on the cobblestone, wait for him to gather himself, and let the dog catch up before walking again. He seemed to appreciate it.

I saw him on my first day in Florence, actually. My roommate, who’d been there a while, was showing me the walk to class on the street near mine, Via Degli Alfani. The sun was bright yellow-orange, tangier, sunnier than the one at home. It angled off statues of accomplished men and hit buildings strong and distinguished—even the graffiti looked like it’d been there a while, knew the town. I struggled to understand sidewalk etiquette.

Then I saw the dog, bumbling along like I was. His front two legs were caught in the air. By the way he studied the ground, I thought he was aiming for a bug. I smirked and looked to tell my roommate, who was about a block ahead of me.

That night, I walked home from dinner at Ristorante Buca Niccolini, a friendly place near the Duomo that mistakenly gave me a water tower of wine when I’d asked for a glass. Focusing on the street-lit cobblestone, working to keep my stride steady, I saw the dog once again, doing the same. It was clear, then, that he wasn’t aiming for a bug, but I was in no position to judge. I crossed sides to give us both the room we needed.

As the nights passed, though, I grew more comfortable in Florence, seeing the resilient little dog all the while. I went up to the statues, learned about the men they represented. I went inside those distinguished buildings, ate home cooked meals with friends who lived in them. I marveled at the graffiti, found my favorites. I got used to wine. I even figured out sidewalk etiquette; in fact, I taught other people.

View of Florence from Piazzale Michelangelo

But somewhere in the final week, the dog and my schedules went askew; I’d walk back from a friend’s or my favorite spot near the Uffizi, and turn on to an empty Via Degli Alfani. Just me and cobblestone. He’d either just been there or would be there soon.

I’d learned basic Italian in class. As my time in Florence ticked away, I desperately wanted to find my dog friend and his patient owner, get down on the street, and ask him his name. To look in his ink-splotched eyes and let him know he’d be okay, that he’d figure it out.

I never did find him. But on my last night, I like to think I saw him in the rearview mirror as my cab took me away to the airport. He looked to be doing better.

It’s been six months since my experience studying abroad. Reminiscing about it is like a thick, vague musk of sights and feelings. Seeing pictures brings back the buildings, the statues, brings context to that musk. But it’s only when I think of my dog friend, out there living, finding his way in a city so sure of itself, does my experience in Florence truly come back to me.

You might be going to Florence soon, or somewhere equally far and sure of itself. Don’t worry, you’ll find your way. And in a place surely full of big differences and attractions, make sure to look out for the little things—or little dogs—that make your experience unique.

I kept a journal during my time studying abroad at Florence University of the Arts this past summer. It was in my hand as I left the country for the first time and stayed there as I experienced one completely new. The trip was enchanting, perception-changing. Now back in America, I still keep the journal close to me—I made a promise to myself to never forget the aura of my stay. Sitting on a plane the departing from Italy, I wrote this: “I’ve just done something spectacular, that study abroad thing. I’ve just flown to Italy, lived and studied there for four weeks, and now I’m flying back. What a four weeks; what an Evan that’s returning … however the trip affected him, he is altogether different, because he’s now done that, and he hadn’t before.”