Food plays a heavy role in the Spanish culture in Catalonia. An important part of absorbing yourself into the culture is getting to know the local specialties. With the Catalan culture, there are plenty of different specialties to offer. Below I have listed eight of my personal favorite foods that I think everyone should try.

These fried potatoes with a spicy sauce and creamy aioli are one of my favorite foods in Barcelona. They are cut into small cubes and are served at any tapas restaurant. One of my favorite places to get them is Bo de B. They have four different incredible sauces that will really blow your mind.

One of the most popular dishes in Barcelona is tomato bread. This is a quick simple dish that anyone could make at home, but is very popular at tapas bars. To create this masterpiece, you cut a tomato in half and rub it against the bread and drizzle oil olive, and add a little garlic, salt and pepper. Many Catalonians absolutely love this dish and this is a staple to the Catalonian culture. Sometimes are restaurants the bread is warm and grilled and makes its taste even better. 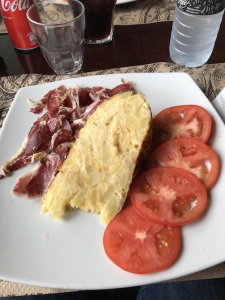 Cured Iberico Ham with a Spanish Omelette and Tomatoes

This is the Spanish version of Italy’s prosciutto. This cured ham is very popular in Spain and will usually come on meat and cheese platters. Iberico ham has a little bit more of a saltier taste and can tend to be meatier than prosciutto. Many times, this ham will come on a baguette with Manchego cheese for a quick bite. The way this ham is sliced is very interesting. At any of the markets or stores that sell the ham, there will be a giant leg of the ham that chefs will slice very thinly to create beautiful cuts of the meat. 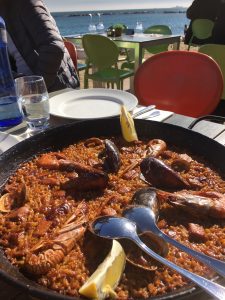 Paella is one of Spain’s most famous dishes. The incredible rice and seafood dish originated from Valencia. Before Paella became the well-known seafood dish we all know, it started off with beans and meat (sometimes even rabbit). People in Barcelona usually eat this meal for lunch rather than dinner since Catalonians eat dinner very late (around 10pm). 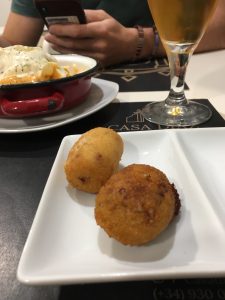 Spanish Croquettes are fried long and oval shaped that are filled with cheese and meat. The meat in the croquettes are either chicken or iberico ham, but there are still many different other flavors.

Calçots are a type of green onion that is from Catalonia. Throughout Barcelona, tapas restaurants offer these as a popular dish where they are grilled or fried to perfection. The traditional romesco sauce is made with hazelnuts, almonds, and red peppers. The combination of the calçot and romesco sauce is a combination that is indescribable.

This creamy popular dessert is Spain’s version of crème brûlée. The difference between the two is Cream Catalana is made with milk vs cream. The cream for the dish incorporates lemon peels and cinnamon which enhances the flavor of the cream. Then to end it all the Crema Catalana is topped off with sugar and is blow-torched to a perfect golden brown. This dessert has spread from Catalonia to all across Spain from its popularity, so if you visit Spain, you must try this dessert.

Kyle was a Spring 2019 Barcelona student from the University of South Carolina.