Andrea, SAI Admissions Counselor took some time to offer some travel advice for students traveling or studying in Paris.

The energy and excitement of the area was electric: a beehive of tourists and students strolled the boulevards, through the Latin Quarter, and along the Seine. It was a warm April evening, and the center of Paris was buzzing.

While the île-de-la-cité, the center of Paris, is exhilarating, after spending a semester studying abroad in Paris, and numerous visits since, some of my favorite places turned out to be the more hidden gems. If you’re looking for places where you can picnic where the locals go, or wander the streets without double-decker tourist buses nearby, here are some of those special spots…

This is the place where you’ll see Parisian families and local students gather on sunny day. Bring a baguette, some Camembert cheese, and a bottle of wine to share with friends for a relaxing afternoon. This is my go-to picnic spot with one of the best views in Paris. Roll out a blanket on one of the grassy hillsides, explore the little waterfalls, or sit by the lake and admire the Temple de la Sibylle, perched on top of the rocky island in the middle of the lake. It’s a wonderful retreat from urban Paris life. 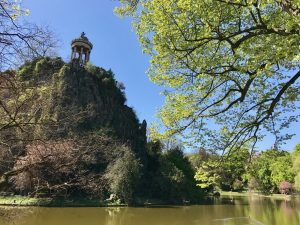 Sit by the lake in Parc des Buttes-Chaumont. The cherry blossoms are gorgeous here in April!

I discovered this amazing park by accident, while wandering (ok, lost), from Parc des Buttes-Chaumont. Little did I know, this is Paris’ third-largest park, home to Europe’s largest science museum, many big-name concert venues, themed gardens (the garden of shadows or mirrors, anyone?), and lots of lawns for picnics. If you want to experience Parisian local life, check out this awesome outdoor space while you’re in Paris.

There’s a scene in the French romantic-comedy film, “Amélie”, where the main character is skipping stones from an iron bridge, and it’s right here! Located in the northeastern corner of Paris, Canal St. Martin is both the canal and the name of the surrounding neighborhood. It’s become a popular spot to grab a drink or coffee along one of the many canal-side bistros and to browse the unique boutiques dotting the side streets, along the Quai de Valmy. While word has definitely gotten out about this area’s bohemian-chic vibe, it still gives you a tranquil break from the more touristy areas. Take the metro to Goncourt or Jacques-Bonsergent, and walk towards the canal, to explore. 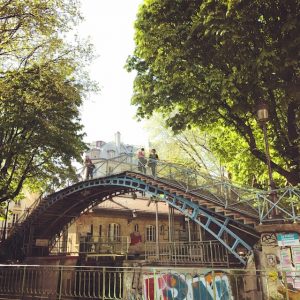 One of the many iron bridges over the Canal St. Martin, a trendy and relaxing neighborhood and canal in northeastern Paris.

While the Latin Quarter is the traditional center of Parisian student life, thanks to the numerous universities nearby, like the Sorbonne, the Butte-Aux-Cailles neighborhood is where to experience Parisian student life without the crowds. Frequently referred to as being a hidden village within Paris, the streets sleep during the day, and come alive at dusk. My favorite place to grab a great-priced dinner, with large portions of Southwest France Basque comfort food, was at the bustling restaurant, Chez Gladines (30 Rue de Cinqs Diamants), with its community-seating inside and stencil art on the walls outside. I’d always go for their escargot or poulet (chicken) Basquaise! After dinner, take a stroll up the street and stop in one of the many pubs. The closest metro is Corvisart, or, Place D’Italie, nearby.

Yeah, there’s the Louvre and Musee D’Orsay, but the Pompidou is a whole different level of “Woah”. It holds Europe’s largest collection of modern and contemporary art from the 20th and 21st centuries, from photography, to painting, to experimental film. Come here to see works from Pablo Picasso, Andy Warhol and Max Ernst, along with present-day visual and new media artists. 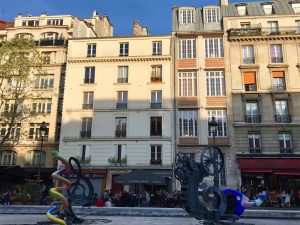 The area outside the Pompidou Museum is alive with quirky sculptures and street art.

Did you know there’s a hidden, Roman arena right in the middle of Paris? The entryway is very subtle, situated on the busy street between shops, but once you walk through the stone entryway at 47 Rue Monge, you’ll arrive at this 1st-century ruin, the oldest Roman monument in Paris. You’ll often see locals playing Boules, a popular outdoor game in France, on the sand at the bottom of the arena. Take the metro to Cardinal Lemoine.

While many people head to the Eiffel Tower to take photos of the city, Paris’ only skyscraper, the Montparnass Tower, gives you iconic views of the City of Light but with the Eiffel Tower. (Now that’s Insta-worthy). The 55th floor is open to the public, where telescopes and interactive screens await. 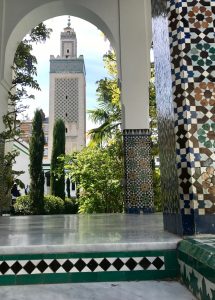 Next to the Jardin des Plants, in the Latin Quarter, Paris’ oldest Mosque helped shelter and save Jews during the Holocaust, and today, it welcomes visitors who wish to reverently explore the spaces and garden. There is also an outdoor Salon du Tea, where visitors can sip Moroccan mint tea while sitting at blue mosaic tables. This place is a must-see not only for the welcoming, beautiful space, but for the important religious and historical insight it provides, as this Mosque is an important community center for the city’s Muslims. Tours are offered most days, in French.

Whether you’re craving dim sum or pho noodles on a rainy day, or just wish to explore a deeply rich cultural neighborhood, the area of Avenue de Choisy, between Place D’Italie and Port de Choisy is one of the largest Asian-immigrant neighborhoods in Europe, home to many Chinese, Vietnamese, and Laotian communities since the 1960s and 70s. Along with an array of diverse cuisine, the neighborhood hosts the annual Lunar New Year parade. 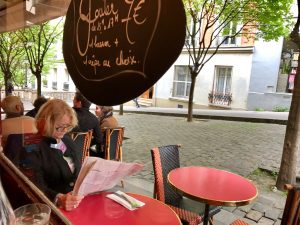 Take a break from the crowds in front of Sacré-Coeur and head to a cute bistro in the neighborhood behind it.

10.) The neighborhood behind Sacré-Coeur

While Montmartre, the neighborhood on the hill that was the center of Bohemian art, is still a very touristy neighborhood, it retains its charm. There is always a crowd gathered on steps below the grand Cathédrale du Sacré-Coeur, with musicians and street performers sprinkled along the streets. However, my favorite spot was behind all of this. Take a walk down the stairways behind Sacré-Coeur to discover a cute neighborhood of boulangeries and bistros. My favorite spot to study with coffee or lunch was at Au Relais (48 Rue Lamarck), a typical French bistro about a 10-minute walk from Sacré-Coeur. To get there, take the metro to the Lamarck-Caulaincourt station.

The longer I stayed in Paris, the more I realized how much there was to experience and explore every day. While it’s tempting to seek out comforts that remind you of home (hello peanut-butter-everything-I-could find) try to find one new place every week that challenges you to break away from familiarity. The city is vast, and you will undoubtedly find your own little spots that you’ll remember for decades.