This year’s Open Doors report study abroad data is provided for the 2015/16 academic year and only counts students who received credit for studying abroad. The study found that, for the 2015/16 year, there was a 3.8% increase in U.S. students studying abroad, with a total of 325,339 students. While this is positive growth, only 1.7% of all U.S. undergraduates studies abroad. Following are some key findings regarding this U.S. study abroad student population. 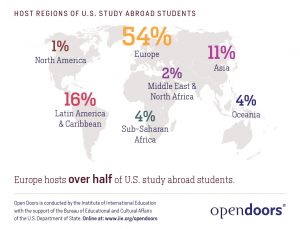 The top major areas of study of U.S. study abroad students in the 2015/16 academic year were:

Both the Science, Technology, Engineering and Math (STEM) and Business and Management fields grew at a faster rate than the overall study abroad growth, with STEM seeing a 9% increase and Business and Management an 8.1% increase. The most popular major within the STEM field was in the health professions, representing 7.1% of all students studying abroad. Foreign Language and International Studies saw a .7% decrease from the year prior.

While the Open Doors findings focus on students who receive academic credit abroad, non-credit abroad experiences (work, intern, and volunteer) were also taken into account. Although this is a much more difficult number to count, 362 institutions reported 23,125 U.S. students completed such programs in 2015/16, with 38% traveling to Latin America and the Caribbean. 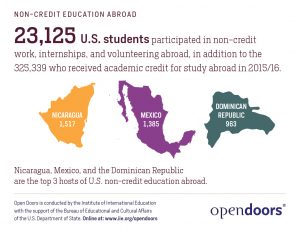 It should be noted that the report does not collect data on Gap Year programs.

While there was an increase in students who identify themselves as members of minority groups studying abroad in the 2015/16 academic year (28% total), the growth was modest, and the percentage is not representative of the diversity on U.S. college campuses. The largest growth from the year prior came from the Hispanic or Latino(a) population, who represented 9.7% of the study abroad population in 2015/16. 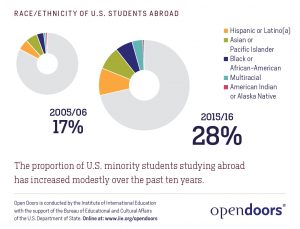 In 2015/2016, the number of students studying abroad with a disclosed disability increased to 8.8% of students (compared to 5.3% the year prior). Of those students, 34.4% of them had a learning disability.

Chiara is SAI's VP of Operations. She grew up in Italy and California, and has a Master's degree in International Relations. Chiara loves travel, good food, camping and great adventures.