My absolute favorite part of my experience abroad was attending Milan Fashion Week 2017. Fashion Week was within the first few weeks of being in Milan and I had sent emails to probably every designer that was having a show. I got back a few rejection emails, which was still surprising that they even emailed me back. I received one invitation to a showroom from COMEFORBREAKFAST. I was so excited that at least one of my emails had been successful. However, just because I did not receive an invite, did not mean that I was not going to try to get in. I attended three shows, Angel Chen, Alberto Zambelli, and Roccobarocco. I attended two showrooms, Laura Fed and Anouki, because a couple of my friends had gotten invites to those. 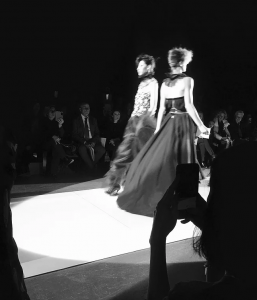 My friends and I had asked our professors how past students had gotten in to fashion shows and they provided us with many different ways. We were told to go by ourselves or in small numbers, so that it was not totally obvious. One way that was successful for Angel Chen, we told them we were buyers from the United States and they just let us in after ‘glancing’ at the list. Another excuse that was successful for Alberto Zambelli was to bring up that we were students at NABA, because being a private arts school, there are many notable alumni currently working for big name fashion houses. 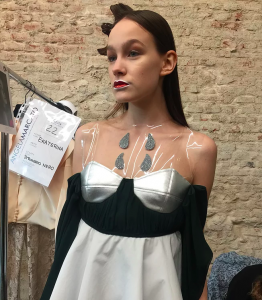 Alberto Zambelli behind-the-scenes, after the show. Press and most of the audience stood up and proceeded backstage, so of course, we followed

We got in to Roccobarocco because one of our professors had gotten us the invite. Among the successes, there were failures. We were turned away from Gucci and Moschino, sadly. One of our classmates was lucky enough and snuck in with a large group to Moschino, and we only found out because she posted a picture to our Facebook group from inside. 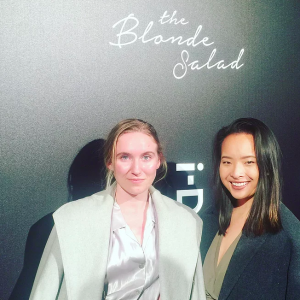 Being a fashion student and fashion addict, all of this was such a ride for me. I would wake up every day of fashion week, with my schedule in hand. I would figure out which shows I wanted to go to and how much time I needed to get there, whether I was taking the metro or MyTaxi. If you’re ever in Milan, Paris, London, or New York during fashion week, try to get in to a show, it’s an incredible experience and you might even come out with a goodie bag. 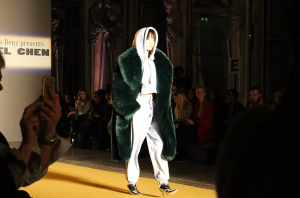